A Touch of Greek: Out of Olympus Book 1 by Tina Folsom 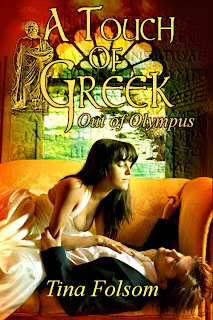 Selfish and gorgeous Greek God Triton is cast out of Olympus after seducing Zeus' mistress and can only gain reentry if he finds a woman who loves him for his kindness and selflessness, not his beauty. When the mortal Sophia - recovering from an eye operation and virtually blind - needs a home healthcare worker, he takes on the role, hoping she will be his ticket home.

While defending Sophia from an unknown adversary, Triton's protective instinct emerges. At the same time rival Gods do everything to doom him to failure. And even if Triton can win Sophia's love, will he throw it away to return home, or will he lose his own heart to the only woman who truly sees him?

A Touch of Greek is the first book in the humorous paranormal romance series Out of Olympus following the romantic adventures of four Gods: Triton, Dionysus, Eros, and Hermes.


If you have been paying any attention to the books I read this last year, you will know that I am a fan of mythology.  I also enjoy romances, so a romance about greek gods?  Completely in my wheelhouse.  This is the first in the series and features the god Triton, son of Poseidon.  The romance is okay, the heroine unremarkable, but what I really enjoyed about A Touch Greek was the friendship between Triton, Dionysus, Eros and Hermes.  A typically masculine friendship full of hyjinx, amusement at the trials of the others and threats of physical violence.  The relationship between the boys was humorous, realistic and thoroughly entertaining.  I look forward to reading the second in the series, A Scent of Greek featuring Dionysus and Ariadne.

~Shel
Posted by bibliojunkies at 12:01 AM