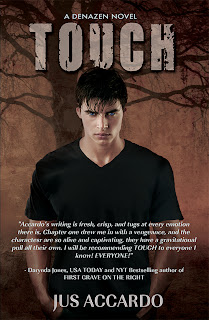 
When a strange boy tumbles down a river embankment and lands at her feet, seventeen-year-old adrenaline junkie Deznee Cross snatches the opportunity to piss off her father by bringing the mysterious hottie with ice blue eyes home.

Except there’s something off with Kale. He wears her shoes in the shower, is overly fascinated with things like DVDs and vases, and acts like she’ll turn to dust if he touches her. It’s not until Dez’s father shows up, wielding a gun and knowing more about Kale than he should, that Dez realizes there’s more to this boy—and her father’s “law firm”—than she realized.

Kale has been a prisoner of Denazen Corporation—an organization devoted to collecting “special” kids known as Sixes and using them as weapons—his entire life. And, oh yeah, his touch? It kills. The two team up with a group of rogue Sixes hellbent on taking down Denazen before they’re caught and her father discovers the biggest secret of all. A secret Dez has spent her life keeping safe.

A secret Kale will kill to protect.

The Bad:
There were parts of the story that were just a little "too" convenient and coincidental, either that or Dez is the absolutely most self-involved person in the world not to notice the world around her.

The Good:
I wasn't sure I was going to like this books when I picked it up, but the premise sounded interesting and I thought I would give it a try.  I was pleasantly surprised that I became quickly engrossed in Kale and what it would be like to experience the world anew.  In some ways I felt bad for Dez, it seems as though everyone in her life used and betrayed her.  In other ways, I found her to be an annoying teenager.  Self-involved and reckless.

All in all, I enjoyed Touch and am reading Toxic for the upcoming release of Tremble in May! 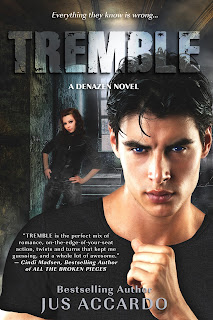 ~Shel
Posted by bibliojunkies at 12:00 AM