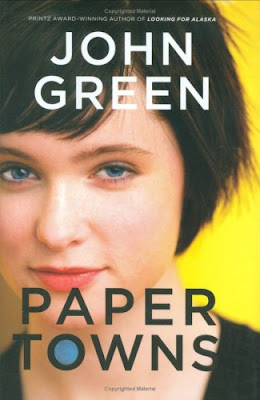 Quentin Jacobsen has spent a lifetime loving the magnificently adventurous Margo Roth Spiegelman from afar. So when she cracks open a window and climbs back into his life - dressed like a ninja and summoning him for an ingenious campaign of revenge - he follows.

After their all-nighter ends and a new day breaks, Q arrives at school to discover that Margo, always an enigma, has now become a mystery. But Q soon learns that there are clues - and they're for him. Urged down a disconnected path, the closer Q gets, the less Q sees the girl he thought he knew.

I have never read a John Green novel, something I needed to correct. My choice was between The Fault In Our Stars and Paper Towns. As Nat cautioned me that the former would have me crying buckets, I thought starting off with Paper Towns would be a good way to go.

John Green has a fantastic sense of sarcasm and humor - have you seen his vlog?  These highschoolers on the verge of graduation are very much normal and ridiculous.  Quentin is just a great guy. In fact, the entire time I was reading it, I thought to myself how much Nat would love him because he’s just one of those good guys, a forever boy.  His relationship with Margo is an interesting one.  As kids, they discovered the dead body of a man under a tree at a park. Quentin pinpoints that moment as the moment that their friendship changed and she became more withdrawn.

When she encourages him to join her on her revenge campaign against her cheating boyfriend and her lying best friend, Quentin feels it’s finally his chance to get close to her again before they graduate. (It doesn't mean that he's not nervous about what they'll get up to.) It’s almost as if the old Margo is back. Throughout the night he senses something is up with her. After an interesting night of activities they go their separate ways. Quentin thinks that now things will be different between them at school. But then she doesn’t show up to school the next day nor the days after. Turns out she has a history of running away and leaving clues behind. Her parents have given up on finding her and have decided to no longer play her games. Quentin though can’t let it go. He discovers that Margo did indeed leave him some clues and he and his friends decide to try and find her themselves. As all this is happening, Quentin can only wonder to himself who Margo has become, why she is doing this and why he’s obsessed with finding her.

I liked that Paper Towns aside from being about friendship and growing pains was also a neat little mystery. With every clue that Quentin came across, which includes the Walt Whitman poem "Song of Myself", I was trying to figure them out too. There were moments where I was worried about what he’d run into.  And while Margo is missing, life goes on as usual with their friends getting ready for prom and graduation. Quentin’s best friends are concerned about him being too caught up in the Margo mystery instead of enjoying the final few days of school with everyone.  I was bothered by Margo herself because I ended up feeling so protective of Quentin. I was annoyed by her mysterious motives for dragging him into her drama without giving him any kind of explanation.  The poor guy goes through hell worrying about her. He has no clue what is going on inside her head and yet he's still big-hearted enough to want to find her and help her.  Those good guys just get put through the ringer!

I will say that Paper Towns does have a satisfying ending for everyone in the sense that it works for each of the characters. It is about the nature of friendship and how it changes. What do you hold on to and what do you let go of? This is what Quentin has to come to terms with eventually.