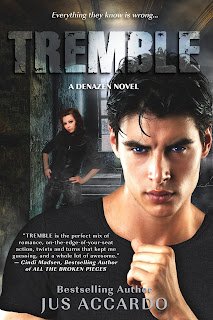 
Dez Cross has problems.  She's almost eighteen and on the verge of losing her mind thanks to the drug the Denazen corporation used to enhance her abilities.  People close to her have turned their backs on the underground and are now fighting for the wrong side.  And then there's Kale...  Things couldn't get any worse.

Until, of course, they do.  Denazen is about to start a new trial - this one called Domination - and it works.  But that means out with the old and in with the new.  The order has been given to terminate all remnants of the second trial - including Dez.  The good news is that there's a survivor from the original trial.  A woman whose blood may hold the cure for the second generation of Supremacy kids' defects.  But the underground Sixes aren't the only ones who know about her.

Dez's father is willing to throw away everything he has to keep Dez from getting the cure - including the one thing that might tear her apart from the inside out.

Tremble was heartbreaking and hopeful, all at the same time.  Dez is facing her impending death and the hate and Kale's rage and anger, all at the hands of her father.  Even facing death, heartbreak and memory loss, Dez is full of sarcasm and spunk, making her an endearing heroine.  Tremble is about the power of love and lengths desperate people will go.  It's a great third installment and I recommend you all pick up this series.  Wit, humor, hot boys and great superhuman fun, who could ask for more?