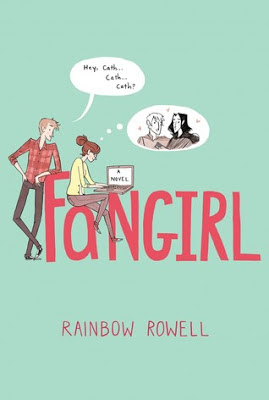 Cath is a Simon Snow fan.

But for Cath, being a fan is her life — and she’s really good at it. She and her twin sister, Wren, ensconced themselves in the Simon Snow series when they were just kids; it’s what got them through their mother leaving.

Reading. Rereading. Hanging out in Simon Snow forums, writing Simon Snow fan fiction, dressing up like the characters for every movie premiere.

Cath’s sister has mostly grown away from fandom, but Cath can’t let go. She doesn’t want to.

Now that they’re going to college, Wren has told Cath she doesn’t want to be roommates. Cath is on her own, completely outside of her comfort zone. She’s got a surly roommate with a charming, always-around boyfriend, a fiction-writing professor who thinks fan fiction is the end of the civilized world, a handsome classmate who only wants to talk about words . . . And she can’t stop worrying about her dad, who’s loving and fragile and has never really been alone.

For Cath, the question is: Can she do this? Can she make it without Wren holding her hand? Is she ready to start living her own life? Writing her own stories?  And does she even want to move on if it means leaving Simon Snow behind?

Rainbow Rowell seriously won me over with Eleanor & Park. And you know how you can love one book so much that you worry if you can love the next one as much? Well, I’m glad to report that I didn’t have anything to worry about here!

The first word to come to mind for how to describe Fangirl is “adorable”. It’s just chock full of adorable that I cannot stop beaming over that fact. Cath and her twin sister Wren have been stuck at the hip since always.  So Cath is shocked when they’re ready to start college that Wren decides to room with someone else, change her appearance and even starts to distance herself from her. It’s an odd feeling for Cath and she’s unsure if she can even make it at college without her sister as her sidekick.

I think almost anyone can identify with Cath’s fear and insecurities about starting at college not knowing anyone and having to create a whole new social circle. Her roommate Reagan is a bit of an imposing personality. Reagan's friend Levi who is constantly hanging out in their dorm room, is a charismatic, outgoing guy with a hipster vibe, is a personality that Cath just can’t quite grasp. Instead of trying to get out there and make friends, she confines herself to her room and her fan fiction writing.

As the school year wears on, Cath starts to break out of her shell a little thanks to Reagan who basically insists that she stop being weird. Levi even begins to get under her skin and before she knows it, these nutty people are her friends. The downside is that she and Wren have started losing touch with each other which concerns Cath.  And even though she’s started branching out, she’s still afraid to completely let go and claim her independence. She's constantly coming up with ways to leave school behind because she wants to avoid the changes that are happening.

Rowell excellently captures Cath's hesitation about being on her own for the first time. Little things like Cath surviving on granola bars in her dorm room to avoid the cafeteria exemplify her fragility. Discovering who she is away from being Wren's twin and learning not to hide behind Simon Snow to become a writer in her own right are pivotal growing experiences for her as a freshman. I felt so protective of Wren and had plenty of appreciation for her Reagan and Levi who looked out for her in their quirky way. But the biggest area of growth is her relationship with her sister as they learn to communicate with each other again and accept the differences that have sprung up between them.

Rowell also did plenty of research on fan fiction to capture that whole world. I'm not big into fan fiction myself simply because I don't have the time to read that much - believe me I wish that wasn't the case! But what I did read in Fangirl was quite entertaining and I also thought it was a great "thumbs up" to the fan fiction world from a fantastic author.

If you read Eleanor & Park and enjoyed it, I know you'll absolutely enjoy Fangirl as well. It's story line is about the same speed and you just can't help but fall in love with Cath and Levi. It's another one of those that leaves you smiling and saying "you go girl!"