The Summer I Found You by Jolene Perry 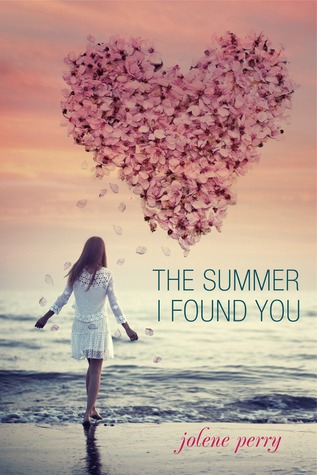 All they have in common is that they're less than perfect. And all they're looking for is the perfect distraction.

Kate's dream boyfriend has just broken up with her and she's still reeling from her diagnosis of type 1 diabetes. Aidan planned on being a lifer in the army and went to Afghanistan straight out of high school. Now he's a disabled young veteran struggling to embrace his new life. When Kate and Aidan find each other neither one wants to get attached. But could they be right for each other after all?

When Kate’s boyfriend dumps her at the end of their senior year, her best friend, Jen, convinces her to attend a senior class event with Jen’s older cousin, Aidan.  Jen waits until Kate is 10 seconds away from meeting Aidan to inform her that he just returned from Afghanistan and his missing an arm.  Jen knows of  Kate’s inability to think before she speaks, but doesn’t prepare her for the meeting sooner because she doesn’t want her to back out.  Which, of course, makes for a more than interesting first impression.

When Kate first meets Aidan the first thing out of her mouth is, “So, what does the other guy look like?”

Aidan is completely appalled by her insensitivity and his response is priceless.   But he is also somewhat entertained by Kate’s serious diarrhea of the mouth.  Because for the first time in his life someone isn’t being careful around him; treating him like he’s a fragile piece of glass that might break any moment.

I loved Aidan.  Here is a young man that has been forced to grow up fast.  He has watched one of his closest friends die a horrible death.  He’s lost a limb and is learning to re-do the mediocre everyday things that everyone else with two arms takes for granted.  He is being forced to completely revamp his plan for the future because the one he depended on was ripped away from him.  But even with all the obstacles that have been put in his way, even with the depression and fear that slows him down, he is moving forward.

And then there is Kate.  Kate is young in so many ways.  I really loved how her character is written.  So many child/teen characters with diseases or illnesses are written as strong and stoic.  Kate is neither of these things.  Here is a young woman diagnosed with a disease that she will have for the rest of her life and she doesn’t even want to think about it let alone accept it.  So she does what any other irrational teen would do.  She pretends her disease isn’t there in hopes that it will just disappear.

Kate and Aidan are as surprised as the next person that they are growing closer.  A friendship that each had meant to be only a distraction becomes an intense emotional attachment that neither of them planned on.   But Kate is not only lying to herself about her disease.  She is also lying to Aidan.  What will it take for Kate to face her future?  And can she learn from Aidan’s example?  Can she learn to accept her diagnosis and continue to move forward with her life?

This was a moving story with plenty of awkward funny moments to lighten the mood when needed.  If you are a fan of YA contemporary romance, I can’t recommend this one enough.  The Summer I Found You will be released on March 15, 2014.  I urge you to go out and buy yourself a copy.

Email ThisBlogThis!Share to TwitterShare to FacebookShare to Pinterest
Labels: Albert Whitman Teen, Jolene Perry, The Summer I found You