As Long As You Love Me by Ann Aguirre 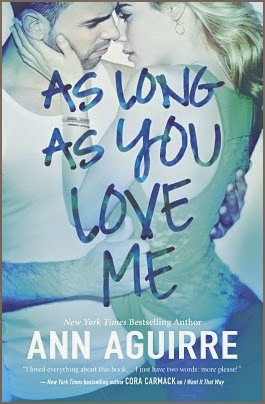 From Harlequin:
Most people dream about getting out of Sharon, Nebraska, but after three years away, Lauren Barrett is coming home. She has her reasons—missing her family, losing her college scholarship. But then there's the reason Lauren can't admit to anyone: Rob Conrad, her best friend's older brother.

Football prowess and jaw-dropping good looks made Rob a star in high school. Out in the real world, his job and his relationships are going nowhere. He's the guy who women love and leave, not the one who makes them think of forever—until Lauren comes back to town, bringing old feelings and new dreams with her.

Because the only thing more important than figuring out where you truly belong is finding the person you were meant to be with.

Aguirre's 2B Series is one of my favorites of 2014. They are incredibly well written, with fun characters, romance and steamy sex. Book 1, I Want It That Way also had a super cute kid – and really how can you resist a romance with a cute kid or pet? I can't.

In Book 1, Lauren leaves college to return to her tiny home town of Sharon, Nebraska, because she has some fairly crippling social anxiety that she's kept hidden for years. She's always been in love with her best friend's brother, Rob and knows she needs to just get over it, but the heart wants what it wants. Rob's involved with a girl Lauren went to high school with, so Lauren knows she can't have him, but when she starts helping Rob with some renovations on his house, she can't help wanting him.

Rob has some pretty intense self-esteem issues because everyone only sees him as a dumb jock and otherwise completely discounts him, even his parents. Not Lauren though, she never treats him like that. She makes him feel special and like he can succeed at anything, including his dream of a custom-made furniture business or a home improvement web series.

Can these two crazy kids figure it all out or is their burgeoning relationship destined to fail? As Rob's career takes off it becomes more and more difficult for Lauren to be around because of her anxiety. And when they reach the breaking point, what will they be willing to risk for true love?

This book will keep you hooked until the very end! Any fan of contemporary romance, or new adult should check out the 2B Series.

Email ThisBlogThis!Share to TwitterShare to FacebookShare to Pinterest
Labels: 2B series, Ann Aguirre, As Long As You Love Me, Book 2, Contemporary Romance, New Adult