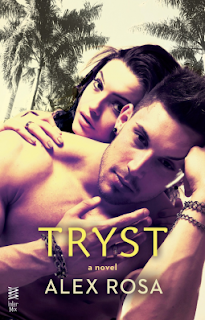 In this sensational New Adult debut by Alex Rosa, boyfriends are too much trouble. So what’s the harm in a little fun?


With an abusive relationship behind her, Skyler moves out of her Orange County apartment, changes her phone number, cuts ties with her friends, and moves in with her brother Josh, a talent agent with a spare room in his incredible house in Hollywood.

Josh is happy to take Skyler under his wing, but he has one rule: she can’t sleep with his roommate, Blake. That’s fine by Skyler. She doesn’t want a man in her life right now—and certainly not cocky Blake who’s with a different girl every night. But his all-American boy charm and his ripped model physique are difficult to refuse. Josh will never know if no one ever tells him. And a little secret now and then never hurt anyone…


I have mixed feelings about Tryst...  I enjoyed Blake, the uber-hot bad boy.  Skyler's best friend, Tucker was a hoot.  The brother, Josh felt fairly irrelevant, except as a road block to Skyler and Blake's relationship.  My mixed feelings stem from the fact that the story felt unfinished.  There seems to be unfinished business with Skyler's abusive ex; with Blake's career and the relationship between Blake and Josh after the events of Tryst.

Notwithstanding the unfinished business, Tryst was a decent love story.  The brother's best friend theme is common in romances - an easy impediment to the burgeoning relationship of our hero and heroine - so it is easy for the books to run together.  Tryst stands out, because, in addition to this, there are the lasting ramifications of an abusive relationship and how a victim moves forward with relationships after removing him-or-herself from the abusive relationship.  Here, Skyler clearly has low self-esteem that makes her think she is not yet good enough for a "normal" relationship.  And Blake has self-esteem issues stemming from his promiscuous ways.  He feels that because of his player status he doesn't deserve Skye.  When it's all said and done, the characters grow and heal together, which is really what it is all about.

I'm hoping that Tryst was the start of a series, because I'm very interested in the story of Josh and Vanessa.  I can only hope that Skyler and Blake give them hell in their story.  :-)