The Devil You Know by Trish Doller 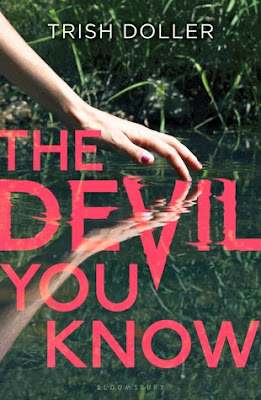 Eighteen-year-old Arcadia wants adventure. Living in a tiny Florida town with her dad and four-year-old brother, Cadie spends most of her time working, going to school, and taking care of her family. So when she meets two handsome cousins at a campfire party, she finally has a chance for fun. They invite her and friend to join them on a road trip, and it's just the risk she's been craving-the opportunity to escape. But what starts out as a fun, sexy journey quickly becomes dangerous when she discovers that one of them is not at all who he claims to be. One of them has deadly intentions.

A road trip fling turns terrifying in this contemporary story that will keep readers on the edge of their seats.

Cadie has felt the heavy burden of responsibility for much of her teen years. Her mother died a few years before, leaving Cadie, her younger brother and her father. Her dad has had a very hard time adjusting to life without her mother and so Cadie has taken on the role of caretaker for the family. In addition to that, she’s also been working at the family’s grocery store. All Cadie longs to do is to be free to be able to enjoy being a teenager. She’s already given up so much – being on the soccer team, her boyfriend and pretty much any kind of social activity just to be able to take care of her family.

When she hears about her friends going to a popular party, Cadie decides that she’s had enough of missing out and heads there to join in on the fun. Truth be told, she’s also a bit curious about what her ex is up to with his new girlfriend. Yes, she’s slightly jealous but mostly disappointed that they broke up because her life became too complicated. So she distracts herself at the party when she meets two cousins who are making a quick stop on their road trip. Embracing her new spontaneous side, Cadie decides to accept their invitation to join them on their travels along with one of her school friends. And this is where things start to get weird. Not only is there an incident involving one of the party revelers the morning of after the party but right before they're supposed to leave, Cadie's friend goes missing.

I was on board with the story up until this point. You’d think that once your friend goes missing, the second bizarre incident in as many days, you’d be on alert and forgo the road trip but no. Cady is so stubborn and desperate to taste freedom that she ignores any warning signs and continues on with the two cousins. She ends up getting herself into quite a mess.

I loved Trish Doller’s other book, Something Like Normal, a story about a young soldier with PTSD, so I was really excited to see that she had something different. Though everything works out at the end, I feel that I would have enjoyed this story more if I wasn't so annoyed with Cadie and her bad decision making.

Email ThisBlogThis!Share to TwitterShare to FacebookShare to Pinterest
Labels: murder, mystery, road trip from hell, Something Like Normal, The Devil You Know, Trish Doller