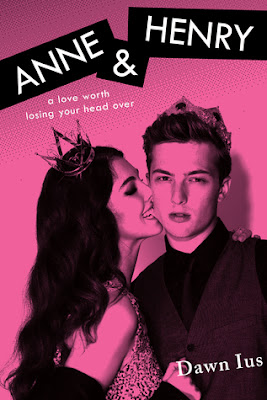 In this wonderfully creative retelling of the infamous—and torrid—love affair between Anne Boleyn and King Henry VIII, history collides with the present when a sizzling romance ignites in a modern-day high school.

Henry Tudor’s life has been mapped out since the day he was born: student body president, valedictorian, Harvard Law School, and a stunning political career just like his father’s. But ever since the death of his brother, the pressure for Henry to be perfect has doubled. And now he’s trapped: forbidden from pursuing a life as an artist or dating any girl who isn’t Tudor-approved.

Then Anne Boleyn crashes into his life.

Wild, brash, and outspoken, Anne is everything Henry isn’t allowed to be—or want. But soon Anne is all he can think about. His mother, his friends, and even his girlfriend warn him away, but his desire for Anne consumes him.

Henry is willing to do anything to be with her, but once they’re together, will their romance destroy them both?

Inspired by the true story of Anne Boleyn and King Henry VIII, Anne & Henry beautifully reimagines the intensity, love, and betrayal between one of the most infamous couples of all time.

Admission: I requested this book because of my love of Tudor history. In fact, I have an entire row on my bookshelf dedicated to them. Historical fiction tends to make me hesitant because I'll inevitably want to separate fact from fiction (hence I’ve avoided the tv show, Reign). However, a reimagining of Anne and Henry VIII’s tumultuous and scandalous relationship that changed the course of England’s history, told in a modern day setting? Yeah, I’m on board for that!

Henry Tudor is privileged, a silver spoon in his mouth and a heavy set of expectations on his shoulders. His very wealthy and influential family would like to see him ascend to great heights. He's treated as if he's the second coming of the Messiah. He dates the “perfect girl”, Catherine. She’s beautiful, popular, comes from another wealthy family. It’s a perfect match. It does crack me up that we’re dealing with teenagers and here their families are ready to have them married off. But we’ll go with it.

Enter Anne, a complete contrast to the stuck up, prim and proper crowd that surrounds Henry. She’s new to the area and doesn’t exactly come from money but her mother married into it. She’ll be starting at the same school as Henry and Catherine. It's love at first sight for Anne and Henry though she wants nothing to do with him. Henry won’t be swayed. Soon they're together shocking everyone including the entire student body at their high school.

Ius juxtaposes this relationship against the real life political intrigue that took place hundreds of years ago. Instead of a country and a conniving royal court, we have a high school from hell and a very powerful, conniving student council. Much like the real Anne Boleyn, this fictional one is maligned and regarded as trash. Henry is totally in love and doesn’t quite understand that his friends are against this union. His family only cares about connections viewing Anne as beneath them. Eventually rumors, plots and some very calculated moves take hold leaving Anne open to public judgment. Can she be strong enough to fight back and rally against the haters?

I thought Anne & Henry was a quick, fun read. While I personally enjoyed making the connections between the events in the book with the actual historical ones, you don’t need to know anything about the real-life duo to appreciate it. My only issues were Henry’s spinelessness and gullibility later on. Oh, and Anne wasn’t any better. I did though really like how Ius ended their story giving it finality. A nod to what did happen. Nice touch!