I'll Meet You There by Heather Demetrios 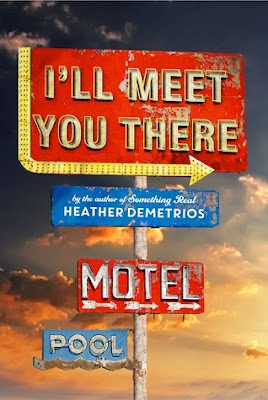 If seventeen-year-old Skylar Evans were a typical Creek View girl, her future would involve a double-wide trailer, a baby on her hip, and the graveyard shift at Taco Bell. But after graduation, the only thing standing between straightedge Skylar and art school are three minimum-wage months of summer. Skylar can taste the freedom—that is, until her mother loses her job and everything starts coming apart. Torn between her dreams and the people she loves, Skylar realizes everything she’s ever worked for is on the line.

Nineteen-year-old Josh Mitchell had a different ticket out of Creek View: the Marines. But after his leg is blown off in Afghanistan, he returns home, a shell of the cocksure boy he used to be. What brings Skylar and Josh together is working at the Paradise—a quirky motel off California’s dusty Highway 99. Despite their differences, their shared isolation turns into an unexpected friendship and soon, something deeper.

I’ll Meet You There struck a nerve with me on many levels beginning with Skylar, Sky to her friends, who wants more than anything to escape her small town for art school in San Francisco as soon as possible. Like yesterday. Here there's nothing to offer a young girl who has dreams of realizing her potential. In the meantime, she has to contend with one last summer at home, working at the motel, keeping an eye on her depressed mother and spending every last minute with her best friends before everything changes. She cannot have anticipated that Josh Mitchell’s return from Afghanistan would impact her summer.

Josh is home now but a different person from the partier and player that he was back in high school just a couple of years before. He lost his leg and has been learning to adapt to life with his remaining one. Away from the Marines, Josh is lost without the purpose it and his Marines family gave him. His nightmares prevent him from sleeping. He has phantom pains because of his missing limb, he’s riddled with guilt about the deaths he’s witnessed including that of his best friend. He’s a mess and the only person who doesn’t handle him with kids gloves is Sky who unknowingly beomes his calm in the center of the storm.

The two reacquaint with one another while working at the motel. Before you know it they’re flirting and forming a bond that they both need during this very uncertain period in their lives. Sky is considering putting her life on hold because she feels her mother is emotionally incapable of taking care of herself. Josh, whose PTSD is always in the background, freaks out at random times. Yet even with the obvious connection between them, they’re both hesitant to take it further for fear of being hurt or hurting the other person.

The story is told mostly from Sky’s point of view though Josh has a few short passages in there. His were the most introspective because his turmoil came through. He feels too damaged to be of good to anyone, especially Sky. During one of his private thoughts, my tears welled up because of this:

“What am I supposed to do when I’m bad for the one good thing in my life?”

Reading Josh’s perspective reminded me of another book I’d read a few years before, Something Like Normal by Trish Doller. Like Josh, the protagonist in that one also suffered from PTSD and both struggled to fit back into this world that’s so far removed from the horrors of war and carnage that they've lived through. Josh may be alive, but it feels wrong to be thankful when so many of his friends are not. Everything feels like a lifetime ago but it's all so raw and unfair and overhwhelming.

Sky and Josh together are good but their relationship is challenged from the start by his emotional state and by her uncertainty over her future. Sky is a sweetheart who cares so much for everyone and Josh wants her to be happy, even if it means he has to stay away from her. They'll have to force the issue eventually on whether they’ll sink or swim together.

Heather Demetrios’ provocative story about two people who have experienced drastically different lives in their very young and formative years, counts as one of the best and most profound I’ve read so far this year!