The Scam by Janet Evanovich and Lee Goldberg 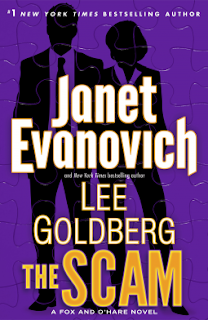 Nicolas Fox is a charming con man and master thief on the run. Kate O’Hare is the FBI agent who is hot on his trail. At least that’s what everyone thinks. In reality, Fox and O’Hare are secretly working together to bring down super-criminals the law can’t touch. Criminals like brutal casino magnate Evan Trace.

Evan Trace is running a money-laundering operation through his casino in Macau. Some of his best customers are mobsters, dictators, and global terrorists. Nick and Kate will have to go deep undercover as high-stakes gamblers, wagering millions of dollars—and their lives—in an attempt to topple Trace’s empire.

It’s a scam that will take Fox and O’Hare from the Las Vegas strip, to the sun-soaked beaches of Oahu’s North Shore, and into the dark back alleys of Macau. Their only backup—a self-absorbed actor, a Somali pirate, and Kate’s father, an ex-soldier who believes a rocket launcher is the best way to solve every problem. What could possibly go wrong?

No one can replace Ranger Manoso as my number one book boyfriend, but if anyone could give him a run for his money, it might be Nick Fox.  Hot in a completely different way and roguishly charming, Nick's scoundrel ways with his heart of gold, make him swoon-worthy.  And don't forget the completely badass Kate, who shows, once again in The Scam, that she can kick ass and look great doing it.

When Kate's dad runs afoul of the Japanese mafia, Kate & Nick reunite their hilarious cast of characters, including a geriatric pirate, in an elaborate plan to take down the mafia and a psychopath casino owner who launders money for all sorts of terrible people.  Unfortunately, old enemies surface to endanger the scam and the players.  A perfect mystery for a fall weekend.

The Scam is crazy adventure, hilarious hijinx and a little bit of romance, with a cliff-hanger that will have you yelling for more (seriously, I yelled)!