With Every Breath Review Tour by Lia Riley 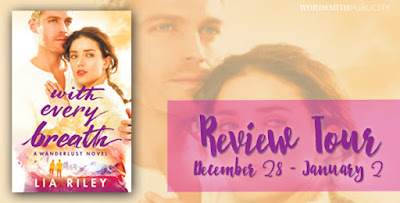 We're celebrating the release of With Every Breath by Lia Riley! 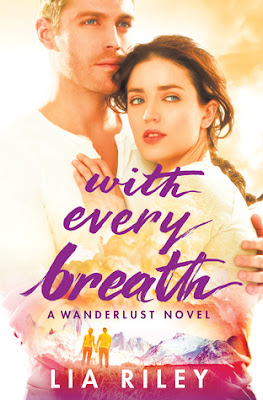 Purchase With Every Breath

At the ends of the earth, Patagonia is a land where ambition trumps reason and the savage summit of La Aguja lures the most determined climbers. It's also the last spot a "play-it-safe girl" like Auden Woods expects to find herself. But she'll lace up her brand-new hiking boots and do whatever it takes to secure a dream job at an adventure magazine . . . even if it kills her. And it just might. When disaster strikes, her only chance at survival comes in the form of the surliest, sexiest mountaineer ever to come out of Scotland.

After a climbing accident cost him his brother, professional mountaineer Rhys MacAskill is at the end of his rope. Redemption is not in his future. That is, until a terrifying storm blows a budding journalist into his tent and it's up to him to make sure they both survive until morning. Despite the demons weighing on him, Rhys can't resist the temptation of the charming American and one wild night just isn't enough.

Auden and Rhys soon learn there are no shortcuts as they navigate their way between life, death, and atonement, and discover something they never expected-love. "Riley writes a captivating story from beginning to breathtaking end." -Publishers Weekly (starred review) on Inside Out 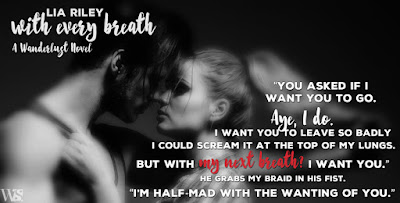 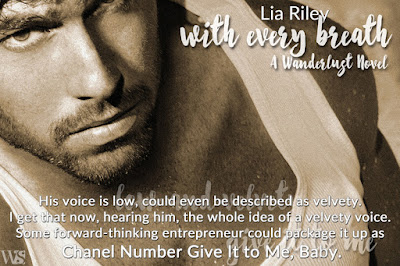 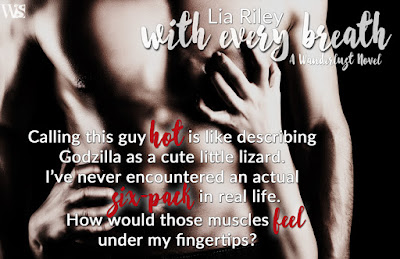 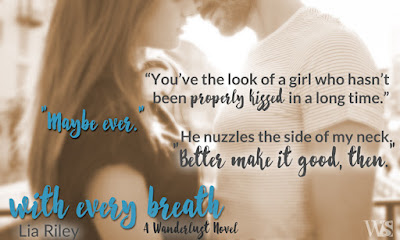 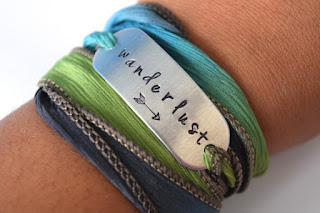 Lia Riley writes offbeat New Adult and Contemporary Adult romance. After studying at the University of Montana-Missoula, she scoured the world armed only with a backpack, overconfidence and a terrible sense of direction. She counts shooting vodka with a Ukranian mechanic in Antarctica, sipping yerba mate with gauchos in Chile and swilling XXXX with stationhands in Outback Australia among her accomplishments.

She and her family live mostly in Northern California.

It feels like Lia Riley has been very busy this year between releasing a novella for the Off The Map series and the latest Brightwater installment. In With Every Breath she takes us to the most southern region in South America, Patagonia for an adventure unlike any other!

Auden is looking to breakout and make a name for herself. Landing a job at Outsider magazine would be a stellar beginning for her and the opportunity to break away from her twin sister’s shadow. During her job interview, Auden’s enthusiasm gets the better of her and she finds herself on her way to Pantagonia to develop a story about her experience there. During a terrible storm one night, she ends up seeking help from another climber, Rhys. Their initial encounter is bizarre to say the least but anything goes in these extreme circumstances. The stand-offish and private Rhys could be the key to her career, that’s if she’s willing to compromise her principles and his trust. Rhys is unsure what to make of Auden who’s such a spitfire and speaks her mind freely. These two strangers, in this paradise far removed from their realities, find something unexpected in each other.

There were quite a few things I could relate to about Auden. I loved her constant, imaginative internal dialogue. It’s kind of how I think most times. I also understood her desire to be escape someone else’s shadow – who doesn’t? Being constantly underestimated isn’t easy. Auden’s sudden adventure while uncharacteristic is exactly what she needs in her life. Rhys is full of heartache and guilt but also so full of generosity and warmth, becoming protective of Auden. She and Rhys have something magical between them. And oh my gosh, they have some AMAZING love scenes! It almost, ALMOST makes me want to go camping ;)

Before I continue, can we discuss how dreamy this cover is? It reminds me of those movie posters from Hollywood's golden age. It's so romantic. And frankly, I wouldn't mind being in Rhys' arms like that. Anyway ...

To quote an ex-colleague of mine when he described me to another one of our co-workers, “She didn’t exactly come from the X Games”. I am so not an adventurer but I enjoy reading about them and living vicariously through them. With Every Breath sated that need by taking me to another corner of the world I knew nothing about and introducing me its beautiful sights. It also gave me a glimpse into the world of mountain climbing; the risks and the thrills that climbers get from the lifestyle. It’s a page turner from beginning to end filled with excitement, danger, humor, awkward situations and a very hot Scotsman (he’s a big bonus!) in need of a lot of loving. Are you up for the challenge?