South of Sunshine by Dana Elmendorf 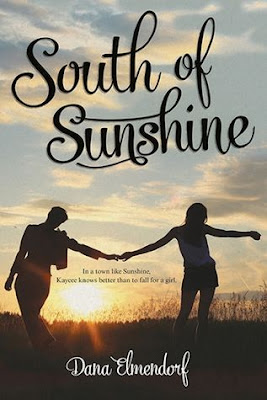 What is Kaycee willing to risk for the sake of love?
And what will she risk for acceptance?
In Sunshine, Tennessee, the main event in town is Friday night football, the biggest party of the year is held in a field filled with pickup trucks, and church attendance is mandatory. For Kaycee Jean McCoy, life in Sunshine means dating guys she has no interest in, saying only “yes, ma’am” when the local bigots gossip at her mom’s cosmetics salon, and avoiding certain girls at all costs. Girls like Bren Dawson.
Unlike Kaycee, Bren doesn’t really conceal who she is. But as the cool, worldly new girl, nobody at school seems to give her any trouble. Maybe there’s no harm if Kaycee gets closer to her too, as long as she can keep that part of her life a secret, especially from her family and her best friend. But the more serious things get with Bren, the harder it is to hide from everyone else. Kaycee knows Sunshine has a darker side for people like her, and she’s risking everything for the chance to truly be herself.

South of Sunshine was one of those books I noticed on the library's display shelf because of its cover. But underneath the endearing title and picturesque cover is a troubling story about how denying your true self can be destructive.

Kaycee is in her senior year of high school and itching to get out of her small town so she can drop the pretence. She has dated guys but mostly to deflect attention away from the fact that she really likes girls. This is a community that hasn't met the 21st century yet. Their narrow minds about different ethnicities and homosexuality keep Kaycee in the closet. When Bren shows up at the high school she's like a shiny, exotic new toy. She's automatically different because she's part Hispanic and she also happens to be gay. Kaycee feels a strong pull towards her but tries her best to deny any of it.

"Because once again, just like I did last night and like I've done for all these years of denial,
I think if I ignore it, it doesn't exist. That's what I have to do to survive this town."
~ Kaycee, p. 174

Reading this book was both maddening and eye-opening. Thank goodness Kaycee is a charming and sweet kid, otherwise this read would have been harder. Sunshine is a judgmental town, superficial to the core. You know it's bad when the churches are segregated and then there's segregation within the church based on social status. Here, within this dysfunction, is where Kaycee has to come to terms with who she is. No wonder her head and her heart are a mess! Religious bigotry is one of my few triggers. I can't ever grasp how any institution that should stand for love and caring can be so cruel to those who are at their most vulnerable. The town's bigoted attitude about anything they're unfamiliar with had me in a foul mood so imagine my surprise when Kaycee's mom and her best friend take the story in a different direction by making important revelations! It taught me an invaluable lesson that I don't always know where someone's fears stem from. It's easy to assume that intolerance can be boiled down to ignorance but those two showed me that there's more to that theory.

That passage from self-awareness to self-acceptance can be intimidating depending on the level of support that is available. Elmendorf wrote Kaycee's gradual coming out so beautifully. She also gives us a glimpse of what coming out means to a teen - the joy it can bring, the toll it can levy, the love it can let in but also the weight of disappointment and hurt when someone you love refuses to acknowledge your truth. I hate that anyone has to even go through this simply because they want to be true to who they are. And it's unfair to have that person carry the guilt for anyone's lack of acceptance or understanding. When it comes to LGBTQ novels, I find it's the coming of age ones like this that I respond to the most. Therefore, I'm so glad I picked up South of Sunshine.

Posted by bibliojunkies at 11:22 AM