Wheel's Up by Annabeth Albert Release Blitz, Review, and Giveaway

Today we are celebrating men in uniform!  Annabeth's Out of Uniform Series showcases men in uniform falling in love and acting ridiculous.  We've got an excerpt, review, and don't forget to scroll ot the bottom for the giveaway! 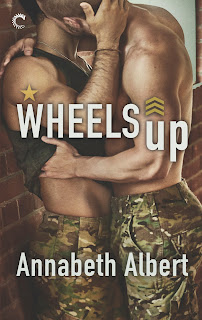 Their love is forbidden, but their hearts aren’t listening to rules and regulations…
Lieutenant Dustin Strauss is a reformed man. No longer a twentysomething hell-raiser, he’s his SEAL team’s new XO—and a man with a secret. Or seven. He's kept his bisexual identity under wraps for years, along with his kinky side and a fondness for the military-themed semi-anonymous hookup website Joe4Joe. His latest chat buddy is more than a sexy online distraction—they're taking their very not-safe-for-work relationship into real time.
Petty Officer Wes Lowe has a smart mouth, a take-charge attitude and an uncanny ability for making things go boom. The life of an enlisted man isn't always enough to satisfy him, but one wild, no-questions-asked weekend with his online love comes close. When a transfer order comes in, Wes feels ready and centered. He'll make a good impression on his new SEAL team and keep his growing feelings for Dustin on the down low.
But as they log more time online and some very real emotions surface, Dustin and Wes struggle to pretend they're just a harmless fling. And when his commander introduces Dustin to his team's newest member, they're in for the shock of a lifetime…and a crushing disappointment: their difference in ranks means even a friendship without sexual contact could end their navy careers for good.
With their hearts on the line, Dustin and Wes may not survive their next mission, let alone find a way toward a future together.

Review:
The Out of Uniform Series is fantastic - lots of wonderful, hot men in uniform falling in love and getting in their own way.  In this installment we have Dustin (brother to Dylan and best friend of Apollo, of At Attention fame and my favorite couple of the Out of Uniform universe!) and Wes.  In a weird twist of fate, Dustin's sext-buddy turns out to be the new subordinate on his SEAL Team.  A relationship with Wes could lead to a court marshal.  And this is what kills me about this book, He. Does. It. Anyway.

Predictably, the boys who think they are oh so smooth and sneaky - aren't.  Conflict ensues.  But, since this is a romance novel, our heroes work things out.  What I loved about Wheel's Up is that our heroes actually take a practical and rational approach to resolving their issues and protecting themselves instead of something irrational and unbelievable.  All that, and we get to see Dylan and Apollo again!

“So?” Wes prompted after she’d left again. “You don’t want me to hook you up with someone, even hypothetically, but what would you like tonight? Burger and watch the game? Or…”
“Or?” Dustin sounded more curious than off-put, which was good.
“Or…and I’m just throwing this out there…I’ve got a hotel room close to here. We could go hang there after we eat. Just talk. And stuff.”
“Define stuff.” Dustin fiddled with his paper napkin, but he hadn’t said no. And he was cautious, which was a good thing, smart. Another trait all the marines Wes knew had—they were wary, always ready for the next threat.
“Talk. Like how we usually do on Saturday nights.” Wes raised his eyebrows and nodded, telegraphing that he knew perfectly well how those nights usually ended, both of them drenched in sweat and spunk, yawning goodnight into the phone.
Dustin hissed in a breath. “And you’d be good with that? Just our usual?”
“Oh trust me—” taking a risk, Wes leaned across the table, putting his lips against Dustin’s ear “—there’s nothing usual about what I want to do to you. And absolutely nothing boring about a live-action version of our regular game.”
He sat back down in time to watch Dustin’s eyes light up at the mention of game. Yeah, Wes knew how to get him going. And the equal measure of trepidation and anticipation in his eyes made Wes’s pulse speed up. He wanted this, far more than he was willing to let on.
“I…” Dustin glanced around again. “I’m not…”
“Shh. You don’t have to give me an answer yet. We can enjoy our food. And the game. Hopefully UVA loses spectacularly so I can gloat about that when I call home tomorrow, and my dad will be in a better mood.”
“Okay.” Dustin sighed, and Wes knew he wasn’t imagining the relief on his features. Darn it. “How’s your sister doing?”
Wes had told Dustin a little about Sam’s heart condition on a night a few months back when he was feeling particularly down. Dustin remembering how close he was to Sam made warmth spread through his chest. “She’s good. Always got to be on the lookout for infection though. Hopefully this year’s cold and flu season isn’t too rough. She made me a new playlist today. I’ll forward you the link.”
“More of that alternative-country?” Dustin made a face. They might share a taste in movies and TV, but in music they differed, almost comically so.
“Yup. Be glad you’re not riding back with me.” His insides gave a little twinge at the reminder that all he had with Dustin was this one night. And that’s why he needs to say yes. If all they had was tonight, then Wes was going to make it one they both remembered for a long, long time. 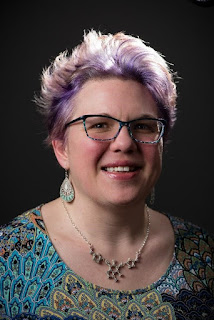 Annabeth Albert grew up sneaking romance novels under the bed covers. Now, she devours all subgenres of romance out in the open—no flashlights required! When she’s not adding to her keeper shelf, she’s a multi-published Pacific Northwest romance writer.  The #OutOfUniform series joins her critically acclaimed and fan-favorite LGBTQ  romance #Gaymers, #PortlandHeat and #PerfectHarmony series.
To find out what she’s working on next and other fun extras, check out her website: www.annabethalbert.com or connect with Annabeth on Twitter, Facebook, Instagram, and Spotify! Also, be sure to sign up for her newsletter for free ficlets, bonus reads, and contests. The fan group, Annabeth’s Angels, on Facebook is also a great place for bonus content and exclusive contests.
Emotionally complex, sexy, and funny stories are her favorites both to read and to write. Annabeth loves finding happy endings for a variety of pairings and is a passionate gay rights supporter.  In between searching out dark heroes to redeem, she works a rewarding day job and wrangles two active children.
Connect with Annabeth: Twitter | Facebook  | Facebook Group | Newsletter | Instagram | Website
a Rafflecopter giveaway
Posted by bibliojunkies at 1:00 AM