The Stuttering Tattoo by Greg Logsted 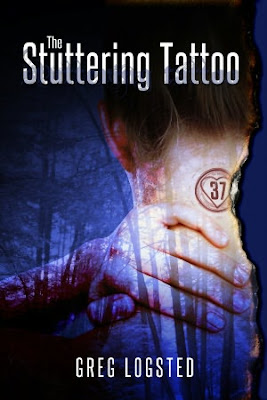 Steven Bishop is extraordinarily ordinary. He goes to school. He rides his motorcycle. He stutters. His best friend is a former Colombian cartel hit man turned cook/construction worker. You know, ordinary. All that changes the day Becky Moore walks into his classroom. Becky is dazzling, enigmatic.
One day Steven gives Becky a ride home on his motorcycle. There, they discover a severed arm, one of, the fingers still has an unusual ring attached: a circle, in the middle of which is a heart at the center of which is a bold number 37. While comforting Becky, Steven discovers a tattoo at the base of her neck: it is the same symbol. And so begins a thrilling descent into a world of crime and murder, a ride wilder than any Steven has taken before.
As you may gather from the above description, Steven’s life is indeed not ordinary.  Living with his cop dad, his mom having left the family earlier, Steven has always been one of the quieter kids mostly due to his stuttering. He prefers giving one-word answers and focuses on his schoolwork, working out and his construction job with his friend, Carlos. When the feisty young Becky walks into his algebra class one day, he feels an immediate and inexplicable draw to her. He follows her out to the parking lot to find her slashing someone’s tires and then walking away.  He’s hooked. He has to know who she is. He bumps into her at a coffee shop and gives her a ride home from the coffee shop. Put that in the "win" column!
Not so fast. A potenitally romantic moment is interrupted when they uncover a severed hand in her backyard. As Steven tries to comfort a very distraught and terrified Becky, he notices that she also has the same tattoo on her neck that is visible on the severed arm. Now faced with something like this most people would normally run screaming the other way but Steven is an unusual kind of guy. He doesn’t scare easily and because he feels so intensely for Beck already, he’s determined to help sort out whatever mess she’s in.
Little does he know how convoluted the mess is. Getting deeper into the mystery he discovers that the 37 is much like the mafia with their elaborate schemes and volatile ways. Members are born into it and no one leaves. Steven's not sure how Becky is mixed up with them. Without any hesitation, he assumes his knight in shining armor role and plots to help her get out.
Logsted has plenty going for him in this book – mystery, murder and stolen identities – to keep the plot in motion. I found it hard to believe at first that Steven, a quiet, stay-under-the-radar guy, would even contemplate getting involved in something like this. But it works. And while some elements seem predictable, there are others that make you second-guess anyone Steven is in contact with. There was also one instance that surprised me so much that I had to go back and re-read a previous chapter to make sure I didn’t miss anything. I thought Carlos was a terrific character inspiring a healthy mix of respect and awe for him knowing the kind of life he led before.  He’s definitely not someone to be messed with and he’s Steven’s strongest ally and defender.
I recommend The Stuttering Tattoo if you’re in need of a mystery or a quick read.
~ Bel
Posted by bibliojunkies at 12:01 AM