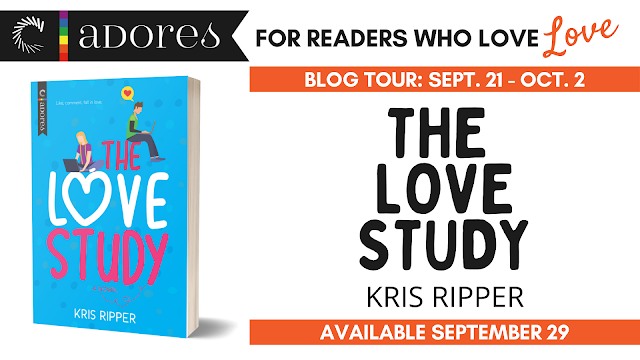 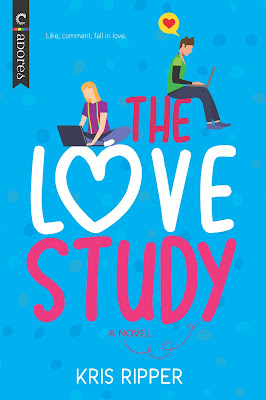 What happens when the search for the perfect date goes perfectly wrong? Don’t miss this charming romantic comedy from critically acclaimed author Kris Ripper.
Declan has commitment issues. He’s been an office temp for literally years now, and his friends delight in telling people that he left his last boyfriend at the altar.

And that’s all true. But he’s starting to think it’s time to start working on his issues. Maybe.

When Declan meets Sidney—a popular nonbinary YouTuber with an advice show—an opportunity presents itself: as part of The Love Study, Declan will go on a series of dates arranged by Sidney and report back on how the date went in the next episode.

The dates are…sort of blah. It’s not Sidney’s fault; the folks participating are (mostly) great people, but there’s no chemistry there. Maybe Declan’s just broken.

Or maybe the problem is that the only person he’s feeling chemistry with is Sidney. 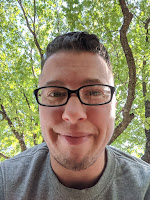 Kris Ripper lives in the great state of California and zir pronouns are ze/zir. Kris shares a converted garage with a kid, can do two pull-ups in a row, and can write backwards. (No, really.) Ze has been writing fiction since ze learned how to write, and boring zir stuffed animals with stories long before that.
Connect with Kris Ripper

I hid my disappointment relief by forcing a laugh. “Oh, me neither. Mostly. Well. Not for a long time. Like…” I focused on the gentle sweep of their hair back from their face as if it would introduce a new topic of conversation. It didn’t.

“See, that sentence seemed like it was going to be followed by another thought.”

“Um, sorry, I realized I was basically spilling my guts to a stranger. You are totally not obligated to listen to me ramble. Only my oldest friends are contractually bound to deal with me being a hot mess.” Cue self-deprecating smile.

“You don’t seem like a hot mess to me and I don’t feel obligated. What were you going to say?”

What the hell. “Just, for a long time my not-dating policy worked? But lately it’s kind of getting…old. I’ve thinking maybe I should…at least try again. With the dating thing.” I wrinkled my nose. “Then I think that’s a horrible idea because oh my god where do you even start? Apps? Bars? I have no idea where people meet to date instead of hook up.”

Their eyes were light brown behind their red-framed glasses and I felt a bit exposed under their gaze, like maybe the glasses had a filter that could read my thoughts. Right when I was starting to shift uncomfortably, they cleared their throat. “I have an idea. It might be a bit obscene, though.”

I batted my eyelashes at them. “I enjoy the obscene.”

“Would you be interested in coming on my YouTube channel? It’s an advice show. I do one livestream and one pre-taped show each week.”

“An interview would be cool, but what if we did a series? You could come on once a week and talk about your recent dating adventures. I could find you the dates if you wanted, since you’d be supplying me with content.” Now their hands sort of danced in explanation. “And if you’re trying to get back into the dating thing anyway, maybe it’s two birds with one stone.”

My brain flooded with words and images—everything from danger, Will Robinson to a vision of Sidney and I shaking hands for the camera at an awards show where we’d just won for “Spectacular Advances in Dating Advice”—but I couldn’t seem to speak.

“Yeah, you’re right, it’s a terrible idea.” Their eyebrows were now a straight line behind their red frames. “Excuse my shameless desire to exploit your emotional turmoil for views.”

“Oh, no, I didn’t…I didn’t think that at all. I mean, I guess yes on the exploiting thing, but that doesn’t bother me. I was more…processing.”

“If it makes it any less gross, if I dated, I would absolutely mine my dating experiences for views.” They frowned. “Okay, no, that doesn’t make it less gross. Sorry. This is a nonideal first impression.”

“I like your glasses,” I blurted. “Just, that was my first impression. Well, actually I thought, Those better not be fucking fashion glasses, and then when I saw they weren’t I was impressed. They look really good on you. Not everyone can pull off red frames.”

“Oh. Um.” They straightened their shoulders. “Thank you.” 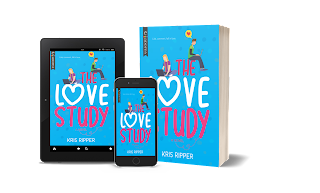 If I had to describe The Love Study in one word it would be ‘cute’. It’s a sweet look in to what it is about relationships that work for some people and not others. Declan is simply too darn adorable for his own good and Sidney is one of the kindest, most thoughtful people ever.

Declan still has misgivings about how he left his ex at the altar on their wedding day even though Mason has forgiven him and they’re still good friends to this day. His uncertainty about his choices and his fear of commitment makes him feel that he might never find something that’ll work for him. He meets Sidney through his friends and the two hit it off immediately. They both get the difficulties of relationships, especially when neither of them are terribly interested in conforming to traditional relationship norms. Sidney suggests that he appear on their podcast and agree to go on a series of blind dates so they can discuss his experiences. The dates are interesting but the chemistry between Declan and Sidney becomes more comforting by the minute.

I liked The Love Study and what makes it work is how endearing Declan, Sidney and the rest of the friends are. Declan’s personality reminds me a lot of someone I might read in an Alexis Hall novel – sweet, a bit awkward and a bit self-deprecating. I liked that about Declan. As for Sidney, I liked their openness and they don’t come with any judgment. I think Declan needed someone like that in his life who was new to him and could offer a fresh perspective on life and love to him. Declan also has anxiety and I was amazed by how well that was handled here. Anxiety manifests differently for people and at different times and for Declan to eventually make connections (along with Sidney’s help) to what’s happening in the moment is such a big step for his own growth.  Sidney is the type of friend you want in your corner with their patience and what seems like bottomless empathy to listen and encourage. I just loved the two of them together.

Would I recommend The Love Study? Yes! On a personal level, I appreciated looking at love and relationships not only from a LGBTQ+ perspective. I want to learn and become more aware of views or lives beyond that with which I'm familiar.  I also liked looking through the lens of someone who feels the pressure of the societal expectations of relationships. Maybe not everyone wants what everyone else wants like flowers, or a big wedding or chocolate hearts. I liked seeing Declan and Sidney make their own rules. Can I also just say how awesome their friend group is? They are joyful and silly and so caring. I just loved them! I found this to be delightful reading where I could happily root for a couple to find their own version of happily ever after.

*Source: ARC provided in exchange for an honest review

Posted by bibliojunkies at 7:22 AM No comments: