The Lifeguard by Deborah Blumenthal 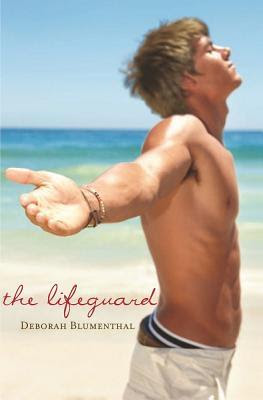 It’s an unsettled summer for Sirena. Back in Texas, her family’s splitting apart, but here in Rhode Island, at the cottage of her free-spirited aunt, it’s a different world. There are long days at the beach and intriguing encounters with him. Pilot. He’s the lifeguard.He’s the lifeguard with shamanic skills. He both saves Sirena and makes her feel lost at sea. Sirena explores her obsession with Pilot and discovers
his mysterious – almost magical – gifts.
Come on ...how many of you are staring at this cover thinking, “I want to go to that beach!”. I feel exactly the same way after reading this romantic story about a magical summer. (By the way, my husband just saw it as he walked by and said, "Really?". I feigned disinterest.)
First off, it’s a relief to have a female protagonist who is thankfully devoid of any kind of teenage angst. Sirena is just your normal girl with a normal best friend and worries about normal things. The biggest drama in her life at the moment is that her parents are divorcing. They send her to her aunt's in Rhode Island while they remain in Texas to hash out the details of their divorce. Sirena takes it in stride. She’s almost practical as she processes these changes. And while I said she’s normal, that doesn’t mean that interesting things can’t happen.
During her stay, she meets a few people who leave an impression on her like Pilot, who spends endless days at the beach, you know, as lifeguards tend to do. She can’t escape him and is conflicted whenever she’s in his presence. She’s giddy being near him and also slightly self-conscious – it’s quite cute to watch. Sirena has an innocence about her that makes you nostalgic to be a seventeen year old again. You just want to wrap yourself up in that feeling. Then there’s also Antonio, an elderly man who sits on the beach every day and paints. He becomes a mentor to Sirena who is an artist herself. With him, she feels a reassuring calm and finds herself opening up to this stranger about the changes taking place in her life. It’s a wonderful friendship that gives her some anchor while she’s there for the summer.
At the urging of her Aunt Ellie, Sirena also starts volunteering at the local hospital thinking the routine will be good for her. This in particular becomes an important catalyst in her own personal growth as she encounters illness, sadness and healing.
There’s a part of The Lifeguard that reminds me of Anna and The French Kiss – you know that feeling of falling in love for the first time; those oh so awkward moments of trying to play it cool when you’re attracted to someone. Those instances made me smile. Then there are those other moments when she’s witness to “miracles”. And they all point to Pilot who sets her imagination on fire. And where Sirena is such a delightfully straightforward girl, Pilot is elusive. But after a few life-altering events, we share in her wonderment as she discovers who he is.
The Lifeguard is very enjoyable. It was a nice change in pace to read a story that's pleasant and relatively uncomplicated but still had mystery to it. I absolutely adore Sirena and I fell in love with Pilot. It's just one of those books where you feel good at the end and you're glad you read it. And if nothing else, it'll just make you even more anxious for a beautiful summer at the beach.
~ Bel
Posted by bibliojunkies at 12:01 AM