Between the Lines #1 by Tammara Webber 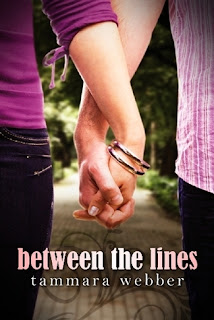 
When Hollywood It Boy, Reid Alexander, arrives on location to shoot his next movie, his goals are the same as always—film another blockbuster hit and enjoy his celebrity status to the fullest while doing so. His costar is a virtual unknown with whom he had blazing hot chemistry during her auditions. The universe is lining up nicely to grant whatever he wants, as usual, until he’s confronted with unexpected obstacles on location like a bitter ex-girlfriend and a rival for the first girl to spark his genuine interest in years.

Emma Pierce just got her big break after more than a decade of filming commercials for grape juice, department stores and tampons, and more recently, bit parts in made-for-TV movies. Nailing the lead role in a wide-release film sent her agent, father and stepmother into raptures, and should have done the same for her. The Problem? Emma is experiencing a building desire to be normal, and starring in a silly, modernized adaptation of one of her favorite novels—opposite the very hot Reid Alexander—isn’t going to advance that aspiration.

Graham Douglas doesn’t fear playing the part of a nerdy dimwit; when it comes to choosing film roles, if it pays, he’ll do it. Besides, his friend Brooke Cameron snatched up the role of the bitchy hot girl and could use his help as a buffer, because her ex is the star. Graham has no problem keeping a handle on the situation, until he finds himself attracted to Reid’s costar, Emma, the girl Reid is pursuing full-throttle with his standard arsenal of charm, good looks and arrogance. (GoodReads)

After reading Easy, I was interested in reading Tammara Webber’s other books so I downloaded Between the Lines.  It took me a little bit to get into this story but once I did, I couldn’t put it down.


Emma Pierce is hot and cold on her new project – the lead in a major motion picture.  Hot because she is playing opposite sexy movie star, Reid Alexander.  Cold because she is thinking about doing “normal” which a starring role in a major movie doesn’t really allow.  When she gets to the set she finds herself making lots of new friends as well catching the eye of one very randy teen heart throb. Very soon she becomes the focus of all the gossip sites and magazines and has decide to if dating a movie star is worth the absence of “normal”.


I enjoyed the entire “cast” of this book.  I really loved Emma’s character.  She was one of those imperfect perfect characters.  In some ways she was very mature for her age and in other ways she was just a 17 year old trying to figure it all out.  Graham was nice but we don’t find out much about him until the end.  He seemed a bit too mysterious. It was hard figuring him out since nothing was ever told from his point of view.  And then there is Reid - a complete and utter jerk.  Since the story alternated between his and Emma’s POV, I kept hoping something would happen to make me like him.  But my hopes were dashed.  He ignores the small twinges of conscience he does have in favor of following the amazingly self centered path he has always walked.   The supporting characters were all instrumental in furthering the story or putting focus on certain attributes of Emma, Reid and Graham.


I wish I could say more about this but I am finding it difficult to say anything more without giving it all away.  What I can say is that I highly recommend this book if you are looking for something with a bit of a Gossip Girl feel.