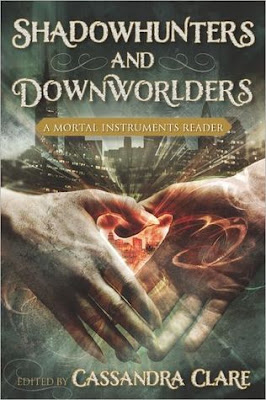 Cassandra Clare’s Mortal Instruments series, epic urban fantasy set in a richly imagined world of shadowhunters, vampires, werewolves, fairies, and more, has captured the imaginations and loyalty of hundreds of thousands of YA readers. Originally a trilogy (City of Bones, City of Ashes, City of Glass), the series has extended to six titles, plus a prequel trilogy, the Infernal Devices, and a planned sequel series, the Dark Artifices. A feature film is planned for 2013.

Shadowhunters and Downworlders, edited by Clare (who provides an introduction to the book and to each piece), is a collection of YA authors writing about the series and its world.

Anyone who is a fan of Cassandra Clare and both TMI and ID will most definitely appreciate Shadowhunters and Downworlders.  Imagine if there was a class where you could dissect and analyze the series. And imagine that class being taught by various guest speakers who happen to be some pretty amazing writers themselves.  Now that’s a class I would sign up for!

I’ve enjoyed both series so far and I never once thought to break them apart like this to study the different characters and subtexts.  Reading through the various perspectives was both amusing and informative - though some ideas discussed did come with more thought than expected. Things that hadn’t occurred to me before were “oh yeah” moments.  Best of all you can tell how much all these authors admire the books and have taken them to heart as the rest of us have.

Add Shadowhunters and Downworlders to your TBR pile - it's a good companion to the series especially if you're one who enjoys to scrutinize the various details throughout the books. There's plenty in there that's insightful and honestly, it makes me want to read through the entire series all over again to see if I can pick up on some of those details I missed before.