All Fired Up by Kate Meader 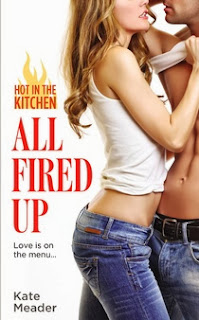 
Cool as a Chicago winter, private events planner Cara DeLuca is a model of self-control... until she meets the only temptation she can't resist: Shane Doyle.  The sexy, Irish pastry chef is too hot, too sure, too young, and after a crazy night in Vegas - her new husband.  While at first Cara wants nothing more than a way out of her sham marriage to Shane, she soon finds that beneath his farm boy demeanor lies a man who can match her drive, both in and out of the bedroom.  How can the wrong guy feel so deliciously right?

...Tastes so, so good.
Shane has carefully structured his career and life around one goal: connecting with the family that doesn't know he exists.  Marrying a woman with more issues than a magazine stand wasn't part of the plan, but melting Cara's icy exterior is so worth the detour.  Now as the annulment date nears and long-buried secrets are revealed, Shane will have to fight for the one thing guaranteeing the perfect life he craves... the current Mrs. Shane Doyle.

I love the premise behind All Fired Up - the crazy Vegas night that ends up with the two main characters married and trying to figure out where to go next.  It's full of potential for funny, awkward good times.  Unfortunately, there wasn't much funny about All Fired Up.  Kate Meader definitely took a more serious route, taking on issues of abuse and eating disorders in the path to true love.

While All Fired Up was more serious than I was hoping for, it was a decent story.  The path to true love never runs smooth and it certainly does not for people with as much baggage as Shane and Cara.  Shane grew up with an abusive, alcoholic father and Cara has an eating disorder.  They both have family issues galore, which makes the idea of their marriage difficult to accept.  Their happily ever after will be hard won.

All Fired Up is the second in this series.  I'd will have to go back and read the first, Feel the Heat.  Get more info from Kate's website:  www.katemeader.com.