One Week Girlfriend by Monica Murphy 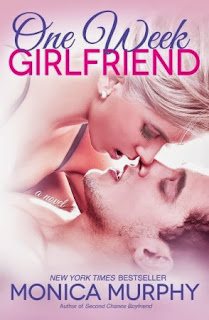 Temporary.  That's the word I'd use to describe my life right now.  I'm temporarily working double shifts - at least until I can break free.  I'm temporarily raising my little brother - since apparently our actual mother doesn't give a crap about either of us.  And I always end up as nothing but the temporary girlfriend - the flavor of the week for every guy who's heard the rumor that I give it up so easily.

At least Drew Callahan, college football legend and local golden boy, is upfront about it.  He needs someone to play the part of his girlfriend for one week.  In exchange for cash.  As if that's not weird enough, ever since he brought me into his world, nothing really makes sense.  Everyone hates me.  Everyone wants something from him.  And yet the only thing Drew seems to want is...me.

I don't know what to believe anymore.  Drew is sweet, sexy, and hiding way more secrets than I am.  All I know is, I want to be there for him - permanently.


I'll be honest.  I didn't love the writing style of One Week Girlfriend, but it is a compelling story that kept me involved.  These characters are all kinds of messed up and have a completely messed up relationship.  If you don't like books that deal with sexual abuse, I wouldn't recommend this series.

The book deals with a lot of complex issues - abandonment, lack of self-esteem or self-worth, sexual abuse and dysfunction - all woven together in a story that will keep you interested and involved.  After reading One Week Girlfriend, I had to jump immediately to Second Chance Boyfriend.   Plus, the covers are hot. 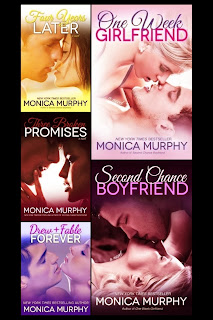