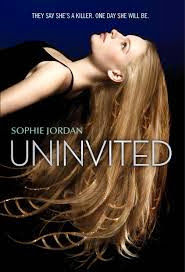 The Scarlet Letter meets Minority Report in bestselling author Sophie Jordan's chilling new novel about a teenage girl who is ostracized when her genetic test proves she's destined to become a murderer.

When Davy Hamilton's tests come back positive for Homicidal Tendency Syndrome (HTS)-aka the kill gene-she loses everything. Her boyfriend ditches her, her parents are scared of her, and she can forget about her bright future at Juilliard. Davy doesn't feel any different, but genes don't lie. One day she will kill someone.

Only Sean, a fellow HTS carrier, can relate to her new life. Davy wants to trust him; maybe he's not as dangerous as he seems. Or maybe Davy is just as deadly.

This has to be one of my favorites reads for the latter half of 2013 for a couple of reasons: one, it's slightly dystopian-ish without being full on dystopian and two, this is unlike anything of Sophie Jordan's I've read so far.

There’s definitely a very futuristic feel to Uninvited but what’s described in here could very well take place today. May be that's what makes this whole story so unnerving. Davy starts out a very normal girl living a very normal life, going to school and hanging with her friends and her boyfriend.  At this point we’ve all been conditioned to know that when the “I love you’s” are declared, something will inevitably go wrong.  And so it does.

The government-mandated HTS test that everyone must take to determine if they have the “killer”  gene comes back positive for Davy. As a result, she is kicked out of her private school and has to attend a local public school.  What makes it worse is that because she has been deemed a potential killer, she’s not even allowed to attend classes with the rest of the school population. She is essentially locked up in a cage with other future offenders.  As if that isn’t enough, her friends from her former life have completely abandoned her, including her boyfriend. What follows is Davy’s very painful and lonely introduction into this new world of second-class citizenship where she is eyed with disdain and suspicion. The wrong move on her part can lead to bad repercussions for her. Her dreams of going to Juillard are over. Any hope of a successful career in any field is impossible. Even the simple act of walking down the street is now a dangerous venture for her.

As I read this I couldn’t help but think that this story offered a fantastic opportunity to discuss the whole nature vs nurture debate.  I came up with a few questions:

Can predicting someone’s potential as a killer actually prevent a tragedy from happening? Os is that just damning someone to an uncertain fate?
Doesn’t ostracizing an entire group of people and treating them as scum only create animosity and bitterness in them?  Wouldn’t that trigger a violent reaction in some because they were pushed in that direction?

What is the role of rehabilitation in this and can you rehabilitate someone who hasn’t yet demonstrated a penchant for violent behavior?

Okay, I know this is sort of heavy stuff but all these questions and more flooded my mind as I read Uninvited at an amazing speed.  I felt so anxious for Davy and her new friends, growing more concerned for her during the second half of the book as she morphed into a different person. That change is thanks in part to the government and its questionable agenda for all the HTS carriers.

All I can say is that Uninvited had me wound up the entire time. To me it was such an interesting concept that stimulated a lot of thought and considering how things have played out so far, there’s certainly plenty of room to maneuver in the sequel. There is a love angle in there too but that doesn’t consume the story at all. Davy is her own rock and she’s gearing up to face what’s next.