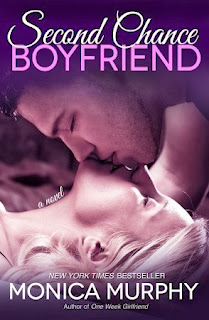 Lost.  Everything in my life can be summed up by that one sickening word.  My football coach blames me for our season-ending losses.  So does the rest of the team.  I wasted two whole months drowning in my own despair, like a complete loser.  And I lost my girlfriend - Fable Maguire, the only girl who ever mattered - because I was afraid that being with me would only hurt her.

But now I realize that I'm the one who's truly lost without her.  And even though she acts like she's moved on and everything's fine, I know she still thinks about me just as much as I think about her.  I know her too well.  She's so damn vulnerable, all I want to do is be there to help her...to hold her...to love her.

I just need her to give me one more chance.  We may be lost without each other, but together, we're destined to find a love that lasts forever.


I was really happy that Fable and Drew got a second chance.  They are both such damaged characters, but they are good for one another.  One Week Girlfriend and Second Chance Boyfriend both deal with serious issues of sexual abuse, neglect, and people with a complete lack of self-esteem.  At times the books can be difficult to read because of the issues, but the overall story is one of survival, hope, acceptance and love.

I enjoyed Second Chance Boyfriend and opportunity for Fable and Drew to get it right this time.  For a big, bad football star, Drew is remarkably romantic and sweet.  Fable is all sarcastic tough-girl.  The combination makes a good read.

The next in the series is Three Broken Promises.  Can't wait to share my thoughts with you all!

Posted by bibliojunkies at 12:01 AM