The Heist by Janet Evanovich and Lee Goldberg 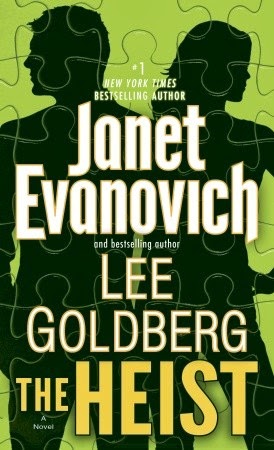 Nicolas Fox is an international con man, famous for running elaborate scams on very rich and powerful people.  He knows that the FBI has been hot on his trail for years - particularly FBI Special Agent Kate O'Hare.  But just when it seems that Fox has been captured for good, he pulls off his greatest con of all: He convinces the FBI to offer him a job, working side by side with O'Hare.

Their first assignment takes them to the side streets of Berlin, the California desert, and remote Indonesian islands as they team up to catch Derek Griffin, a corrupt investment banker charged with stealing millions from his clients.  Finding Griffin on his private island is going to test O'Hare's patience and Fox's skill.  High-speed chases, pirates, and Toblerone bare are all in a day's work... if O'Hare and Fox don't kill each other first.

Fans of Stephanie Plum may be in for a bit of a shock with this series.  It definitely has hints of Stephanie's ridiculous hilarity, but O'Hare and Fox are definitely more put together than Stephanie and Lula when they go to work.  There are plenty of laughs, imaginative cons, a fascinating story, but The Heist lacks the heat and romance of a Plum novel.  This is definitely more mystery than romance and it works.  It's sort of a more con-based White Collar.

For a fun mystery, I definitely recommend The Heist.