The Swan and the Jackal Release Day

J.A. Redmerski is a very, very busy lady. Not only does she write excellent New adult novels like The Edge of Never and The Edge of Always, she's also the author of In The Company of Killers, an adult suspense series. We are super happy to help celebrate the release of The Swan and the Jackal, the third book in the series.

If you're unfamiliar with this series, don't fret, we've got you. The first book, Killing Sarai, is on sale for $0.99! Or you can  just enter for your chance to win a set of these books below courtesy of AToMR Tours.

To whet your appetite, check out the excerpt: 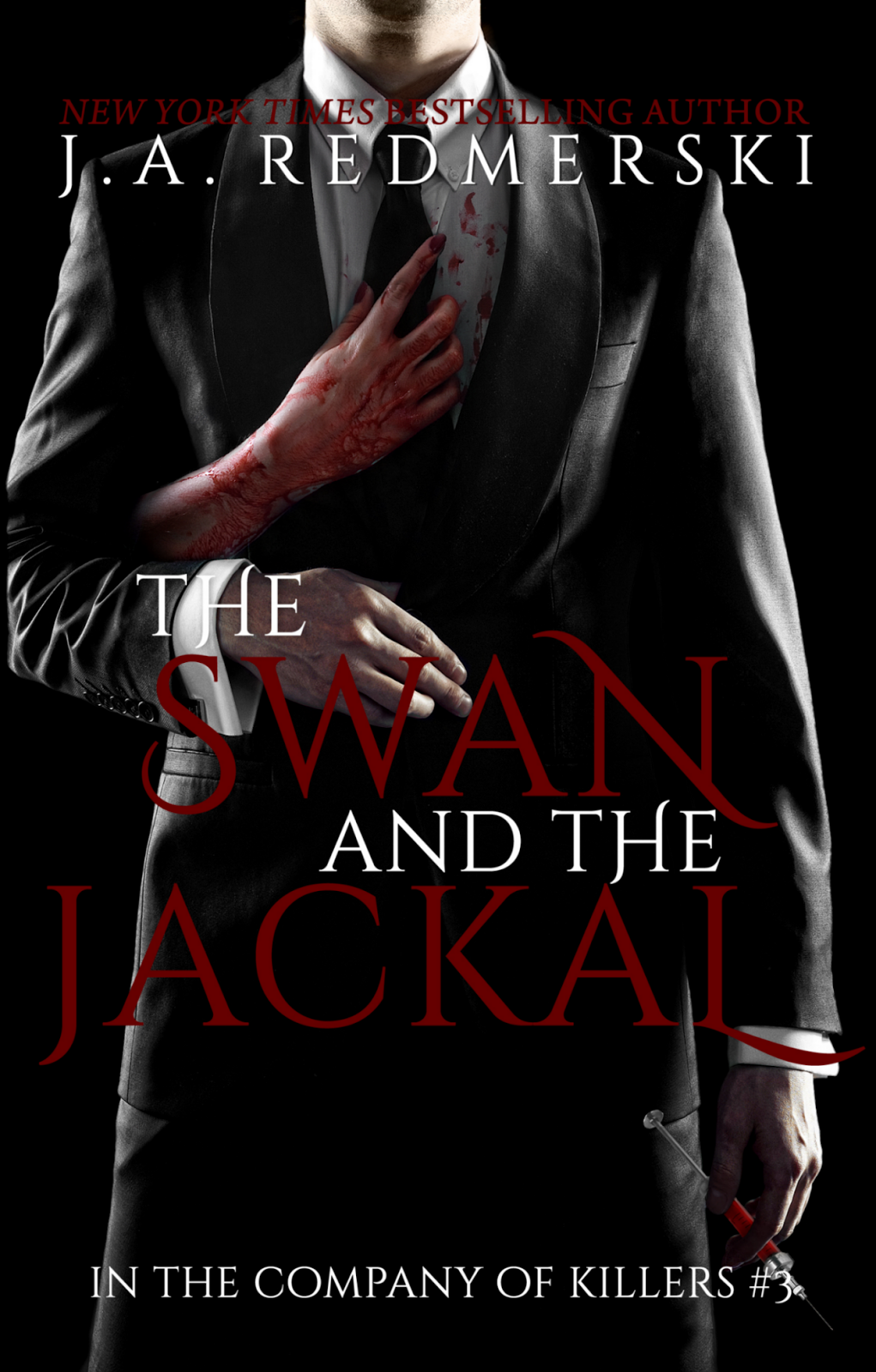 Fredrik Gustavsson never considered the possibility of love, or that anyone could ever understand or accept his dark and bloody lifestyle—until he met Seraphina, a woman as vicious and blood-thirsty as Fredrik himself. They spent two short but unforgettable years together, full of lust and killing and the darkest kind of love that two people can share.

And then Seraphina was gone.

It’s been six years since Fredrik’s lover and sadistic partner in crime turned his world upside-down. Seraphina went into hiding and has eluded him ever since. Now, he’s getting closer to finding her, and an innocent woman named Cassia is the key to drawing Seraphina from the shadows. But Cassia—after sustaining injuries from a fire that Seraphina ignited—suffers from amnesia and can’t give Fredrik the information he desperately seeks. Having no other choice, Fredrik has been keeping Cassia locked in his basement as he not only tries to get her to recall her past—because she and Seraphina share it—but also to protect her from Seraphina, who clearly wants her dead.

But Cassia is a light in the darkness that Fredrik never believed existed. After a year subjected to her kindness and compassion, he finds himself struggling with his love for Seraphina, and his growing feelings for Cassia—because he knows that to love one, the other must die.

Will light win out over darkness, or will something more powerful than either further destroy an already tortured soul?

(Note: THE SWAN & THE JACKAL is NOT a New Adult title.)

Cassia pushes herself closer when I thought she couldn’t get any closer and urges me to look at her. Her right hand moves toward my face to console me, but I stop it, holding it at the wrist and pushing it back down.

“The only one of us who should be talking about our past, is you,” I tell her.

Her doe-like eyes fall under a shroud of disappointment.

But she’s not going to give up so easily.

“You’ve asked so much of me, Fredrik,” she says with such kindness, “but when I ask anything of you, you turn me away. I only want to know this one thing. I don’t care anymore about Seraphina, or the history you have with her. I don’t even care what I have to do with it.” Her soft hand ends up touching the side of my face anyway, and I’m not sure how she slipped it past my barrier. “All I care about anymore is you, Fredrik.” She peers deeply into my eyes and ensnares my gaze, her face full of heartbreak and longing.

“What are your demons trying so hard to kill?”

I push her hand away more forcibly this time.

“Do you remember anything?” I ask, disregarding her question altogether.

“Stop,” she says with more intensity than I expected. “You’re going to give me this. Before you leave me alone down here another night, you’re going to tell me.”

The desperation in her eyes bores into me. I look away, only to look right back at her.

A lump moves down my throat and settles somewhere in my chest. All ten of my fingers spear through the top of my dark, messy hair and I let out a miserable sigh of defeat.

I never talk about my past to anyone. Ever. I try not to think about it, but on some days that is as futile as trying not to breathe. It wasn’t until I met Seraphina eight years ago that I learned to control it, that I became a much different man from the one who hunted shit stains like Dante Furlong, tortured and murdered them every other night, never feeling the satisfaction that I longed to feel with every kill. I was like a drug addict, always looking for a fix but never really satisfied enough to stop. Never satisfied at all, because I only wanted to do it more and more.

Seraphina helped me control the perpetual urges. She showed me how to release the darkness within me with quieter, cleaner methods so that I didn’t leave a trail of bodies and evidence behind. But the biggest impact that Seraphina had on my life was making me feel like I had one. Because before her, I was just a speck of dust floating around in oblivion. I didn’t know the meaning of happiness, or understand the thrill of pleasure or the hunger for excitement. I was just a shell of a man who knew only darkness and death, who only felt the emotions of anger, and hatred, and rage and vengeance.

But Seraphina, she was my dark angel, who came into my life and showed me that there was so much more to living than I ever understood. Ever since she left me in that field the night she set my house ablaze, I’ve been slowly but surely succumbing to my old life again, and I need to find her before I fall too far.
If I haven’t already.

Born November 25, 1975, J.A. (Jessica Ann) Redmerski is a New York Times, USA Today and Wall Street Journal bestselling author. She lives in North Little Rock, Arkansas with her three children and a Maltese. She is a lover of television and books that push boundaries and is a huge fan of AMC’s The Walking Dead.

From the author of the New York Times, USA Today & Wall Street Journal bestselling novel, THE EDGE OF NEVER, comes a story of passion and survival…
--- 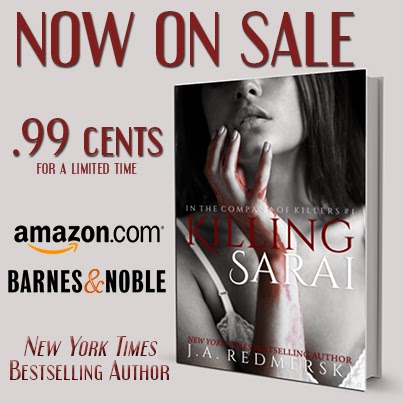 Sarai was only fourteen when her mother uprooted her to live in Mexico with a notorious drug lord. Over
time she forgot what it was like to live a normal life, but she never let go of her hope to escape the compound where she has been held for the past nine years.

Victor is a cold-blooded assassin who, like Sarai, has known only death and violence since he was a young boy. When Victor arrives at the compound to collect details and payment for a hit, Sarai sees him as her only opportunity for escape. But things don’t go as planned and instead of finding transport back to Tucson, she finds herself free from one dangerous man and caught in the clutches of another.

While on the run, Victor strays from his primal nature as he succumbs to his conscience and resolves to help
Sarai. As they grow closer, he finds himself willing to risk everything to keep her alive; even his relationship with his devoted brother and liaison, Niklas, who now like everyone else wants Sarai dead.

As Victor and Sarai slowly build a trust, the differences between them seem to lessen, and an unlikely attraction intensifies. But Victor’s brutal skills and experience may not be enough in the end to save her, as the power she unknowingly holds over him may ultimately be what gets her killed.

This is their story…

Determined to live a dark life in the company of the assassin who freed her from bondage, Sarai sets out on
her own to settle a score with an evil sadist. Unskilled and untrained in the art of killing, the events that unfold leave her hanging precariously on the edge of death when nothing goes as planned.

Sarai’s reckless choices send her on a path she knows she can never turn back from and so she presents Victor with an ultimatum: help her become more like him and give her a fighting chance, or she’ll do it alone no matter the consequences. Knowing that Sarai cannot become what she wants to be overnight, Victor begins to train her and inevitably their complicated relationship heats up.

As Arthur Hamburg’s right-hand man, Willem Stephens, closes in on his crusade to destroy Sarai, she is left with the crushing realization that she may have bitten off more than she can chew. But Sarai, taking on the new and improved role of Izabel Seyfried, still has a set of deadly skills of her own that will prove to be all she needs to secure her place beside Victor.

Amazon | Barnes and Noble | Kobo
Goodreads
e'd like to thank AToMR Tours for including us and for providing the giveaway. Thanks Readers for stopping by :)

You know the drill - good luck!