The Hot Corner by Amy Noelle 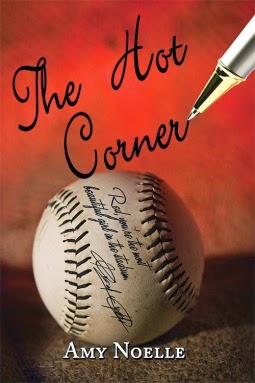 Professionally, Danielle Pierce is making a name for herself writing biographies of famous athletes. Her star is on the rise, and her publisher is pleased. Her personal life isn’t going as swimmingly, and she’s recently back on the market after calling off her engagement to Mr. Perfect-On-Paper, not that she’s looking for anyone special. Her career is her focus and it keeps her content.

Her agent and publisher throw her a curveball she never saw coming when she’s assigned to cover the hottest baseball player—on and off the field—Bradley Reynolds. Brad, the Dodgers’ third baseman, spends as much time on the covers of tabloids as on the sports pages, dating models and actresses, each one more beautiful than the last. But he doesn’t let them distract him from his need to excel on the field. Baseball comes first, and it always has, ever since the love of his life walked away from him years ago. Danielle Pierce had been the only woman who ever mattered to him, the only one who ever would.

Dani never thought she’d have to see Brad in person again, let alone spend weeks with him writing his biography. He broke her heart in college, and she’d never risked it since. Seven years later he selects her to write the story of his life, and she’s stuck between a rock and a hard place. If she refuses, she looks like a coward. If she gives in, he wins. Can she be around him without falling for his Southern charm and deadly looks again? Can she show him that he didn’t break her? She doesn’t know what his game is, but she hopes she’s strong enough this time to play without getting burned.

Dani's career takes off thanks to her first two sports biographies that are fast gaining attention, and as a result her publisher wants to capitalize on this. Her current assignment is to interview Brad Reynolds, mega-talented baseball player and tabloid fixture, for his biography. Her publisher is very well aware that the two have a previous history but the opportunity to write a book about one of the hottest athletes around is too good to pass up. Despite her own reservations, Dani goes with it because even she admits she’s a bit curious about Brad.

When they meet for the first time in seven years she’s irritated to find herself still physically attracted to him. This makes keeping him at arms-length difficult. But she has a job to do and she intends to do it properly. They get on well enough but in the back of her mind, she’s always viewing him as he’s portrayed in the tabloids – a womanizer with a trail of broken hearts behind him. It doesn’t help that one of those is her broken heart from when they dated in college and eventually had a messy break up. In the flashback scene, you see what happened from Dani’s perspective and why she broke up with him. She gave Brad a different story though claiming it was for the sake of his career. Problem is, she was rather hasty in her decision and we can go ahead and chalk that up to immaturity. But she didn’t know that then and hindsight is such a pain in the behind.

In the present, Brad employs everything in his arsenal to woo Dani back, trying to convince her as best he can that he’s the same guy he was in college. He has never known the real reason she broke up with him. Trusting Brad is not something she’s going to do willingly but as she interviews some of the more important people in his life, she learns that he just may be the same man she fell for.

Brad is committed to her right away whereas she still doesn’t trust him fully. And how can she when she sees women falling all over him? When she does decide that a second chance is worth the potential heartbreak, she falls all over again. And because of this second chance she considers the possibility that may be she had things wrong seven years before. The great thing is that she’s admitting to her mistake. Now she has to fess up to Brad and who knows what that would do to him, to them.

Aside from Dani and Brad, there’s also his good friend Pamela, an actress who happens to be his ex. You’d think that would make things difficult for Dani but no. Pamela’s say-it-like-it-is personality adds some very funny moments and she quickly becomes a good friend to Dani. She helps Dani see past all the glitz and glamour of Brad's life and encourages a reconciliation between them.

I had a great time reading The Hot Corner. It was exactly what I needed – a more grown up romance featuring two people rebuilding a relationship and finally being honest with each other. The chemistry between Dani and Brad is spicy but it’s the romantic gestures that Brad offers Dani that are utterly swoon-worthy.  And as I'm waiting for Spring to get here and counting down to baseball's opening day, what better way to bide the time than by reading about one of the boys of summer?