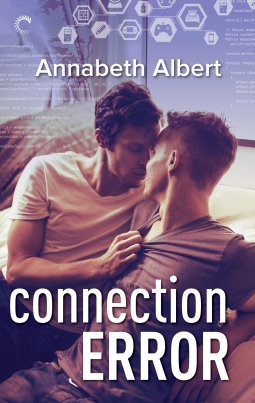 ****
It's typical of video game programmer Josiah Simmons to be the last one on the plane on the way to the biggest meeting of his career. Though he's (mostly) coping with his ADHD, he can't handle another distraction. But he also can't ignore his rugged seatmate—especially once he learns the military man's a fan of his game.

Ryan Orson refuses to let his severe injuries pause his career as a navy SEAL. He's got hours of grueling physical therapy ahead of him, and no time for anything that might get in the way of his return to active duty. But that doesn't mean he's above a little first-class flirtation with geeky-cute Josiah.

When a delay strands the pair in St. Louis, they agree to share a hotel room and a night of gaming. Neither expects their new connection to move to the next level in the light of day. Opposites may attract, but is this game over before it's even begun?

If you have read Status Update or Beta Test you have met Josiah.  You have also experienced, to an extent, Josiah’s ADHD.  The kid can’t sit still and his actions in past books made you close your eyes and shake your head.  BUT…Josiah is also super loveable.  So it’s no surprise that he got his own story.  And it’s also no surprise that, once again, Annabeth Albert knocks it out of the park.

Josiah has been entrusted with the most responsibility his employer has ever given him at once. And he is determined to not screw it up.   Even with his meds, staying focused takes a lot of strength and distractions are not welcome.  But life likes to throw obstacles in our way and Josiah meets the biggest obstacle ever in Ryan Orson.

Ryan is not going to let his injuries and new disability get in his way of returning to active-duty.  Which means, just like Josiah, distractions are not exactly wanted at this point in his life.  And definitely not distractions caused by an awkward kid that can’t stop moving and that has a bad habit of not thinking before he speaks.

As in the other books in this series, these men initially form a bond over a mutual love of video games.  A bond that progresses into friendship and more.  Together (and sometimes alone) they struggle with the failure to meet the high expectations that they set for themselves.  And yet they also encourage each other to embrace the new possibilities that major life changes have forced on them.  These are two heroes with different disabilities that learn how to share their lives and experiences in a way that not only holds one another but also builds one another up.

If you have read the other books in the series, you will be happy to see past heroes appear.  I firmly believe you will also love Ryan and Josiah’s families.  Their moms are absolutely amazing and supportive and, I firmly believe, are what allow these characters to be balanced and healthy instead of wallowing in too much angst.  Oh, don’t worry.  There is SOME angst.  Have you met me?  It’s my favorite!

So YES, buy this and read it!  I have yet to enjoy a book Annabeth Albert that doesn’t leave me immensely happy and satisfied.  I’m confident that you will feel the same!

Posted by bibliojunkies at 1:43 PM