Afraid to Fly by L.A. Witt 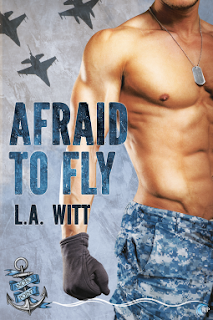 
Once a fearless fighter pilot, Commander Travis Wilson is now confined to a desk. It’s been eight years since the near-fatal crash that grounded him, and it still rules his life thanks to relentless back pain.
Lieutenant Commander Clint Fraser almost drowned in a bottle after a highly classified catastrophe while piloting a drone. His downward spiral cost him his marriage and kids, but he’s sober now and getting his life back on track. He’s traded drones for a desk, and he’s determined to reconcile with his kids and navigate the choppy waters of PTSD.
Clint has been on Travis’s radar ever since he transferred to Anchor Point. When Clint comes out to his colleagues, it’s a disaster, but there’s a silver lining: now that Travis knows Clint is into men, the chemistry between them explodes.
It’s all fun and games until emotions get involved. Clint’s never been in love with a man before. Travis has, and a decade later, that tragic ending still haunts him. Clint needs to coax him past his fear of crashing and burning again, or their love will be grounded before takeoff.

Source:  Advance copy in exchange for an honest review.
Clint and Travis have each been through a lot.  Both are struggling.  Struggling through each day to make it to the next.  When each finds out the other bi-sexual their appreciation for the other turns into something more.  But neither really thinks the relationship can be more than sex given their respective issues.

What Afraid to Fly really comes down to is two messed up guys who struggle a little less together, but who are afraid to make the leap, and end up getting in their own way.  This one has a lot of angst and feels y'all, so read at your own risk.  If you dig the angsty feels, you will love Clint and Travis.