The Shattering by Karen Healey 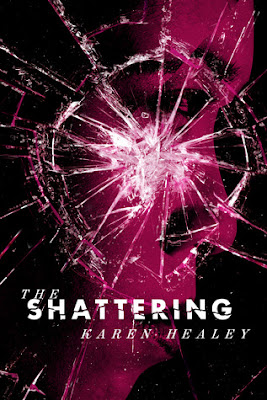 “If you want to find out who murdered your brother, follow me.”
Keri, Janna and Sione have one thing in common: Their older brothers are dead.  Each death was ruled a suicide, but there were no notes, no warnings, and no explanations.
So they’ve worked out a theory: Their brothers were murdered – and weren’t the only victims.
As the search for the serial killer goes on, mysterious forces are unearthed and suspicion is cast on those the three trust the most.  When secrets shatter around them, can they save the next victim?  Or will they become victims themselves?
Wow!  That was exactly what I thought when I had finished The Shattering, a quiet thriller set in a beautiful paradise town of Summerton in New Zealand.
Keri kicks off the story recounting the memory of her brother’s recent death.  Still reeling from the shock, she refuses to accept that it was a suicide.  A chance encounter with former childhood best friend, Janna, who implies that Jake’s death could possibly be a homicide, wakes Keri from the stupor she's been in and fires her ambition to find and destroy the murderer.  Janna organizes a meeting of the minds along with her friend, Sione. These three form an unlikely friendship as they delve into the mystery surrounding their brothers’ deaths and unwittingly expose more mysteries about the small town of Summerton and its inhabitants.
This is essentially Keri’s story though the reader gets a glimpse into Janna and Sione’s world through third person narrative.  Inviting the reader to view events and memories through each character's experience is genius.  Each brings their own unique perspective that allows the mystery to unfold as it does.  Keri’s inherent need to be in control and always be prepared keeps the threesome’s task in order. Sione’s detailed research of the murders allows them to connect the dots. Janna’s tendencies toward flightiness and witchcraft encourage them to open their eyes to the unlikely possibility that perhaps there’s something far more sinister than just a serial killer on the loose.
The story starts off slow which allows for important groundwork to be laid out before things pick up.  When a series of scary and inexplicable events causes them to either behave out of character or succumb to harm, they realize that there are in fact dealing with diabolical forces.
The Shattering is a brilliant, gripping novel that had me so wrapped up in the enormity of the mystery that I never for a second even considered the twist ending that made me gasp.