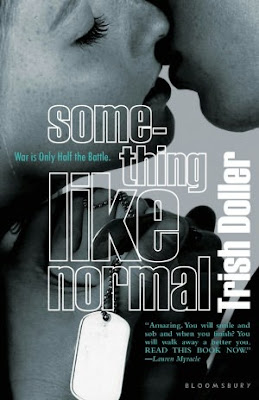 I just came home from Afghanistan.
My parents are splitting up.
My brother has stolen my girlfriend.
(He also stole my car.)
And I’m haunted by the ghost of my best friend.
Then I run into Harper.
(Technically, her fist runs into my face.)
She’s beautiful, smart, funny …
… and she wants nothing to do with the messed-up Marine who ruined her life.
Sometimes the best you can hope for is something like normal.
Sometimes what you get might be even better.

I chose to read Something Like Normal  because I wanted something contemporary. With all the baggage mentioned above, I was fully prepared for the story to spiral into depression. That never happened. Instead, I found myself very much drawn to Travis Stephenson, the 18 year-old Marine returning home to Fort Myers for a month’s leave.


What impressed me about Travis is his startling maturity. He profoundly honest about himself and his family. He accepts that things are far from ideal: his estranged relationship with his over-bearing, alpha-male Superbowl champion dad, his jealous, undermining younger brother and his eager-to-please mom. His dysfunctional relationships don’t stop there. There’s also his ex-girlfriend, Paige who sent him a “Dear John” letter while he was in Afghanistan. The postage had barely stuck to the envelope when she took up with his brother. Awkward! So you see, it’s not exactly a happy homecoming.


Throughout the story, Travis is haunted by the death of his best friend and fellow Marine, Charlie. Often he reminisces about his experience in Afghanistan but zeroes in on his close bond with Charlie. He’s riddled with guilt over his loss and has yet to process all the things he’s been through. It's a revelation to realize that he feels more at home with his Marine brotehrs in a war torn region than he does with his family in Florida. He feels like a fish out of water. His year away has given him perspective, allowing him to define his idea of what “family” is. And having been in the company of his brothers, knowing that they’d stick with each other through hell and worse, he’s not interested in mending fences with his father and brother.


When Travis runs into Harper, a girl who has been dogged by awful rumors that Travis himself started, he is spun around on his head. Initially she wants nothing to do with him and makes that clear after a swift punch to the face. Hey, a girl deserves her moment of revenge after going through high school hell, right? But they keep running into each other and Harper starts to loosen up even offering to help him with a family dinner.


Here’s where I came to like Travis. Travis hates himself and most everyone around him. He’s been disappointed by his family. He has no pretensions about himself and can be a real ass. He admits his flaws, acknowledges his mistakes and owns up to his jackass nature. Harper is a breath of fresh air, opposite of him and his ex-girlfriend. With Harper, he cares about what he says and does. He’s enamored by her and picks up on her little mannerisms that make him go weak:


“ … she gives me a tiny bit-lip smile that knocks the wind out of my chest.”


And then there those moments when he shows his vulnerability:


“I want to tell her I won’t hurt her, but what proof does she have of that? Thing is, I don’t want to hurt her. Harper brings out something different in me than Paige. Something better. At least, I want to believe that.”


Every time he noticed Harper, I smiled because he was genuinely happy then. This was something good finally happening to him. Something worth protecting. With Harper’s sincerity and patience, he starts to come to grips with Charlie's death and the traumatic events he witnessed while in Afghanistan. He also steps up to be the kind of man his mom needs in the light of his father’s many transgressions.


Something Like Normal was engaging from start to finish. Travis’ drive to become a better person and work through is issues is admirable. He's the underdog you root for. The story leaves you feeling hopeful that each day gets better and brighter.