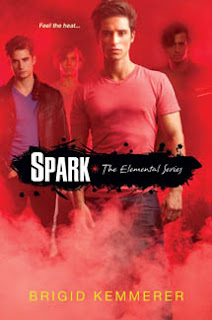 Gabriel Merrick plays with fire. Literally.
Sometimes he can even control it. And sometimes he can’t.
Gabriel has always had his brothers to rely on, especially his twin, Nick. But when an arsonist starts wreaking havoc on their town, all the signs point to Gabriel. Only he’s not doing it.
And no one seems to believe him. Except a shy sophomore named Layne, a brainiac who dresses in turtlenecks and jeans and keeps him totally off balance. Layne understands family problems, and she understands secrets. She has a few of her own.
Gabriel can’t let her guess about his brothers, about his abilities, about the danger that’s right at his heels. But there are some risks he can’t help taking.
The fuse is lit…

Those of you that follow the blog know that the first in the Elementals series, Storm, is one of my favorites of 2012 so far (check out my review here).  I felt some trepidation in reading Spark, because let's face it, often the second book in a series is the worst (i.e. New Moon).  Amazingly, I liked Spark more than Storm.  Being stingy with my five star ratings, I really had no hesitation in giving one to Spark.  I was and remain completely blown away Gabriel's story.

Gabriel's element is fire and his control over it iffy at best causing some incidents he would really rather forget, but that are forever burned into his mind.  The death of his parents, the attacks by the other Elementals, the threat of the Guides, his strained relationships with his brothers - all combine to make Gabe a very angry young man.  Gabe's anger, rage and fear all leap off the page, forcing you to feel his struggle as if it were your own.

It's very rare for a book to make me feel something, especially so swiftly and deeply.  I felt this way with Storm, but Spark took it to an entirely different level.  Spark is a heart-pounding, totally engrossing follow up to Storm - so engrossing you will swear you can almost feel the flames.  Brigid Kemmerer is definitely a talent to watch.  The sneak peak at Spirit made me want to bang my head on the wall since it does not publish until next year!  Oh my god you guys, it was sooo good!

So, there you have it.  My second 5 star rating.  I hope you all read Spark (but read Storm first!) and let me know what you think.  I hope you love it as much as I did.

~Shel
Posted by bibliojunkies at 12:00 AM