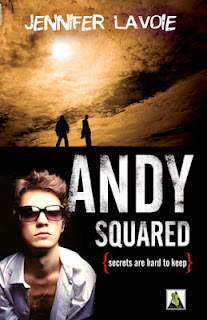 Seventeen-year-old twins, Andrew and Andrea Morris, have always been close. They share everything—from their friends to a room—and they both enjoy star positions on their high school’s soccer teams. All’s right with the twins...or is it?

When new student Ryder Coltrane moves from to their small town, he spins Andrew’s world upside down. All of Andrew’s past relationship troubles begin to make sense and his true feelings start to click into place after Ryder comes out to him. His friendship with Ryder turns secretively romantic, but secrets, they soon find out, are hard to keep. Once rumors start to fly, so-called friends turn on them, and the boys’ relationship turns into a bomb about to explode. But Andrew never expected it would be his own twin, Andrea, holding a lighter to ignite it.
Andy has a reputation for dating girls and then quickly breaking up with them.  He keeps up the cycle because his classmates expect it from him.  But he is feeling unsatisfied and he has no idea why.  Enter new student Ryder Coltrane.  Andy is physically attracted to Ryder the first moment he sees him.  But he doesn’t recognize the physical attraction for what it is and chooses to write it off as nothing important.  Andy and Ryder quickly become inseparable and before long Ryder is coming out to Andy.  The conversation leads to Andy’s first kiss with a guy and the story takes off.  We see two boys struggle with being in the closet, being outed without their permission and the aftermath they have to deal with in regards to friends, family and classmates.
This was a good story.  The subject matter was delivered with care without pulling any punches.  It was also fast paced.  I finished this one quickly which is always a good sign as it means I didn’t want to put it down.  The only complaint I have is that the writing seemed a bit…distant.  The story is told in the 3rd person.  And although it was told from Andy’s POV, I got the impression that I was hearing the story from an outsider looking in and not really from Andy at all.  I think this maybe would have been different had it been written in first person but it is hard to say.  In the end that doesn’t outweigh the positives of this book.  This is a story that I will recommend to anyone at almost any age that is looking for a introduction to the m/m sub-genre.
Thank you Jennifer Lavoie and Bold Strokes Books for yet another great title.
Nat
Posted by bibliojunkies at 12:01 AM