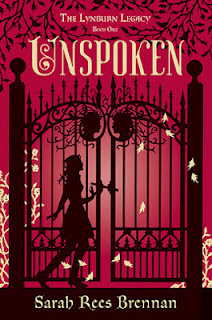 Kami Glass loves someone she’s never met . . . a boy she’s talked to in her head ever since she was born. She wasn’t silent about her imaginary friend during her childhood, and is thus a bit of an outsider in her sleepy English town of . Still, Kami hasn’t suffered too much from not fitting in. She has a best friend, runs the school newspaper, and is only occasionally caught talking to herself. Her life is in order, just the way she likes it, despite the voice in her head.

But all that changes when the Lynburns return.

The Lynburn family has owned the spectacular and sinister manor that overlooks Sorry-in-the-Vale for centuries. The mysterious twin sisters who abandoned their ancestral home a generation ago are back, along with their teenage sons, Jared and Ash, one of whom is eerily familiar to Kami. Kami is not one to shy away from the unknown—in fact, she’s determined to find answers for all the questions Sorry-in-the-Vale is suddenly posing. Who is responsible for the bloody deeds in the depths of the woods? What is her own mother hiding? And now that her imaginary friend has become a real boy, does she still love him? Does she hate him? Can she trust him?

If you have read my reviews you will not find it a surprise that I am drawn to books that pull me in emotionally.  I thrive on angst (well at least in my imaginary worlds; I don’t have much time for it in my actual life).  So how happy was I to read Unspoken.  A book with the perfect amount of angst tempered with a decent amount of snark.


I immediately fell in love with Kami Glass.  She is one of the most emotionally strong female characters I have read.  She is determined, a bit pushy and very protective of herself.  She is always taking charge and is constantly cracking jokes.  The utter ridiculous banter that she and her father serve up is creative and hilarious.


Then there is our bad boy hero, Jared.  Jared is an unfriendly jerk that rides a motorcycle which he has crashed at least 50 times.  But as is often the case, this bad boy is using his jerk-like tendencies as a cover for his sadness and insecurities.


Kami and Jared have known each other for years.  They are mentally linked and have been each other’s “imaginary” friend since birth.  They were never quite sure if the other was real until Jared moves to Sorry-in-the-Vale.  Many authors would have taken that defining moment and used it to begin a grand romance.  Sarah Rees Brennan takes the more “realistic” route.  Both of them are scared.  They have never been sure if the other was real.  Now that the one friend that knew everything about them is a flesh and blood person the reality of how much power they have over each other is overwhelming and frightening.  They both find themselves cautiously testing each other’s boundaries but at the same time putting up more walls to protect themselves.


But that is only part of the story.  There is plenty of mystery in Sorry-in-the-Vale ever since Jared and his family have moved back.  Strange things are happening in the woods and everyone s acting strangely now that the Lynburns are back in town.  Kami is determined to find out what is going on and she has recruited her friends to help her.


This story is fast moving and full of intrigue and action.  Oh, and the ending.  I haven’t wanted to throw a book across the room so much since that cliffhanger Cassandra Clare threw at us at the end of City of .  Thank you, Sarah Rees Brennan for making me happy, sad and angry all at the same time.  Yet again I lament that I have to wait a WHOLE YEAR for the next installment in a series.  But I can’t complain too much because that means I have found another book to love which in my opinion is a total win.

Nat
Posted by bibliojunkies at 12:55 AM