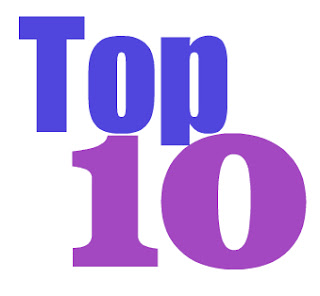 Wow.  Is it the end of the year already?  Where did the time go?  2012 was a rough year for all of us in one way or another.  And because of that each of us went through long lasting reading funks.  But even with that funk I managed to read 78 books this year. That is high for me on a normal year so I won't complain...

As usual, I had a hard time deciding which books to include in my Top Ten of 2012.  I, of course, cheated a little by adding a few honorable mentions at the end. How I narrowed those down to only three is byond me...So here it is.  My Top Ten of 2012.  In no particular order.

The Lovers Dictionary by David Levithan - A modern love story told in single words and definitions. So many pages resonated with me and how I feel about the Executive Officer. I still go back and re-read passages.  And the best part?  David Levithan continues to define life, love and relationships through words on Twitter @loversdiction

Rockoholic by C.J. Skuse - This one snuck up on me.  It was nothing what I expected.  Instead it was so much more.  A brilliant dramatic comedy  that is in turn hilarious and disturbing.  As I stated in my review, C.J. Skuse should be applauded her sheer awesomeness.

Dash and Lily's Book of Dare by Rachel Cohn and David Levithan - I am so happy that I read this right before Christmas.  A perfect romantic comedy that not only put me in the holiday spirit but also had me giggling well into the early hours of the morning.  I believe this has been optioned for a movie and I will be absolutely thrilled if it makes it to the big screen. AND if I can put a Dash on hold for youngest daughter, that would be most excellent.

Pushing the Limits by Katie McGarry - The chemistry between Echo and Noah not only drips off this hot cover, it also drips off every single page within the book.  It was steamy.  It was angsty.  It was romantic.  And it made me cry.  A quadruple threat.  I can not wait until the companion novel, Dare You Too, is released in May 2013.

Making Promises by Amy Lane - I was instantly smitten with forever-boy (or forever-man in this case since this isn't YA and he is 30-something) Shane.  His patient pursuit of the adorably prickly and bitchy Mikhail is so understanding and loving that I just couldn't help but fall in love with him.  Also, how could I not love a book with this beautiful quote, "I cannot face you if you think I look at you and see anything less than the man you are.  I am not settling for you, I am reaching for you, and there is a difference..."

The Fault In Our Stars by John Green - I find it impossible to discuss this book with someone that hasn't read it.  The sheer beauty and sadness of it is overwhelming.  All I will say is that John Green is a genius.  His previous stories are great but this one….well there is a reason that it has been so well received by so many.  Once you read it, check out this to answer to any and all of your questions regarding Hazel and Augustus:  http://onlyifyoufinishedtfios.tumblr.com/

Unbreak My Heart by Melissa Walker - So often books are about being hurt by someone else.   Melissa Walker is one of the rare authors that chose to focus on the character that did the hurting.  We all make mistakes in our lifetime.  Some of those mistakes are bigger than others.  This story was about learning to live with those mistakes and how to rebuild your life after suffering the damage you caused.  This story was beautiful and I think is a must read for teens just so they know that life does move on and it does get better.

Under the Never Sky by Veronica Rossi - This was one of the first books I read this year.  So often I will read something early in the year that I really enjoy but then it is overshadowed by something else.  In twelve months, Under The Never Sky has never swayed from my Top Ten.  This is a perfect combination of romance, fantasy and sci-fi and the second in the series will be an auto-buy for me when it is released the first week of 2013.

The Curiosites by Maggie Stiefvater, Tessa Gratton and Brenna Yovanoff & Boys of Summer Edited by Steve Berman - As I have mentioned numerous times, I do not like short story compilations.  This year, a number of YA authors set out to teach me a lesson.  Both The Curiosities (a collection of supernatural and horror stories) and Boys of Summer (an anthology of Gay YA shorts) proved to me that there are not only some amazing short stories out there but also a number of great authors that I can't wait to read more of.

Gambling Men by Amy Lane - To be honest, I could have added Amy Lane books to most of my Top Ten.  And it was REALLY difficult for me to choose between Gambling Men and Making Promises.  So this gets honorable mention. The biggest reason (besides the hilarious use of poker metaphors) is that I married a Quentin.  Yeah, that's right.  If you have read this you know to be super jealous ;-)
Posted by bibliojunkies at 12:00 AM