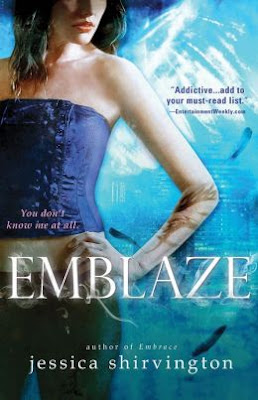 Once again Violet Eden faces an impossible choice ... and the consequences are unimaginable.

Violet has come to terms with the fact that being part angel, part human, means her life will never be as it was.

Now Violet has something Phoenix - the exiled angel who betrayed her - will do anything for, and she has no intention of letting it fall into his hands. The only problem is that he has something she needs too.

Not afraid to raise the stakes, Phoenix seemingly holds all the power, always one step ahead. And when he puts the final pieces of the prophecy together, it doesn't take him long to realise exactly who he needs in order to open the gates of Hell.

With the help of surprising new allies, ancient prophecies are deciphered, a destination set and, after a shattering confrontation with her father, Violet leaves for the islands of Greece without knowing if she will have a home to return to...

This is the third installment in the excellent Violet Eden series. People I was so excited to get my hands on this that I may or may done have done a little jig in celebration. The appeal of Emblaze for me is simply Violet. She was empowered from an early age even if she wasn’t aware of it. Her friendship with Lincoln has been the key to her survival and as a result we’re not stuck with a simpering, sniveling helpless young woman. Instead, we have someone who has had all the training and resources at her disposal to prepare her for her calling. It’s refreshing and in order words, Violet is kick ass. Her skills are continually developing and she is beginning to trust her instincts.She doesn't forget who she is even when she's making tough decisions. Everything she does, she does with purpose. Violet is impressive in this one, especially when it comes to her fierce loyalty to her best friend, Steph.

Emblaze also finds this peculiar motley crew of Grigori and Exiles become a more cohesive unit. Other than Violet herself, only Lincoln and Griffin are aware of her true nature and they’re determined that it remain a secret, especially from Josephine, the second in command at the Academy who comes to supervise and observe this group. With the devastating deaths from the previous expedition still casting its ugly shadow over them, Violet and Lincoln know that they cannot be together and work very hard at keeping their distance. It’s maddening and unfair and every moment between them is charged. Violet’s reaction or attraction rather to Phoenix makes things all the more perplexing for her. Stuck in the middle between two hotties – oh what’s a girl to do?

Same as in Entice, the gang is off to another exotic location – Greece –  this time to stop Phoenix from unleashing all hell. There are some dubious alliances and questionable motives all of which had me reeling through some pretty suspenseful moments. With so much at stake, it's great to see what everyone's special powers and gifts are and how they come together to stave off this crisis. And by the time it all comes to a head, Violet receives the shock of a lifetime that unsettles her completely. These new revelations mean unknown ramifications for her and her family. I honestly have no idea where it can go from here but I tell you what. I'll be glued to every single page when the next book comes out!

Click here to read the Jessica Shirvington interview and contest!
Posted by bibliojunkies at 12:05 AM