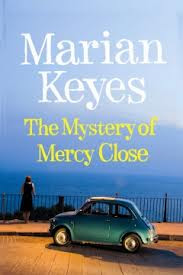 Helen Walsh doesn’t believe in fear – it’s just a thing invented by men to get all the money and good job – and yet she’s sinking. Her work as a Private Investigator has dried up, her flat has been repossessed and now some old demons have resurfaced.

Not least in the form of her charming but dodgy ex-boyfriend Jay Parker, who shows up with a missing persons case. Money is tight – so tight Helen’s had to move back in with her elderly parents – and Jay is awash with cash. The missing person is Wayne Diffney, the ‘Wacky One’ from boyband Laddz. He’s vanished from his house in Mercy Close and it’s vital that he’s found – Laddz have a sell-out comeback gig in five days’ time.

Things ended messily with Jay. And she’s never going back there. Besides she has a new boyfriend now, the very sexy detective Artie Devlin and it’s all going well, even though his ex-wife isn’t quite ‘ex’ enough and his teenage son hates her. But the reappearance of Jay is stirring up all kinds of stuff she thought she’d left behind.

Playing by her own rules, Helen is drawn into a dark and glamorous world, where her worst enemy is her own head and where increasingly the only person she feels connected to is Wayne, a man she’s never even met.

I have loved Marian Keyes since I first read Sushi For Beginners. After that I read Watermelon the first book that introduced me to the Walshes, a funny, dysfunctional Irish family. Since then, I’ve read the subsequent books each featuring a different Walsh sister. Then I had to suffer through a long wait before The Mystery Of Mercy Close finally came out.

This one features the youngest Walsh sister, Helen, who is perhaps the most hilarious of them. She’s in her early 30’s, has her own detective agency and “happily” seeing someone. Life goes pretty well for a while until she ends up losing her precious flat because she has defaulted on her mortgage payments. She then has to move back in with her parents. To make matters more confusing, her current beau Artie gets on so amicably with his ex that she’s always over at his place. A little overwhelmed, strapped for cash and feeling the need to have something to focus on so she doesn’t feel like such the loser, she takes on the case of pop star, Wayne Diffney, who has gone missing just days before a massive reunion tour.  This should be no problem. Helen has a peculiar way of looking at things and she’s proud of it so it shouldn't take her long to solve this case. The real problem is that she has been hired by her ex-boyfriend Jay, who has a huge stake in the band. Working together is not exactly her idea of fun but she puts up with him. Hey, if you're broke and been reduced to living with your parents, you can't exactly complain...too much.

So how does she cope with her current situation? She fixates on the case. She develops  a kinship with the mysterious Wayne whom she’s never met finding some distorted sense of comfort by crashing in his flat at Mystery Close every night.

The thing I love about Marian Keyes is that she gives each of her characters a distinct personality. Helen is one sarcastic, witty, dry-humored gal who has serious people issues. She basically has no filter and only a few people get her.  She has the kind of abrasive bluntness about her that I sometimes wish I could have. Her random irrational quirks such as her disdain for hot drink, love of somber-looking wall paint colors and her use of a "shovel list" to keep track of things that annoy her, only make her more of a curiosity. After only getting glimpses of her in the previous books, I was so happy to get a full dosage of Helen’s craziness. But as with all Marian Keyes books, there is a darker side to all her stories. Helen is very slow to accept that she suffers from depression though it’s glaringly apparent to the reader.  The motions she goes through including the things she latches on to are comical at first until you realize how much she’s struggling. Don’t worry though because Keyes with her typical panache cleverly balances Helen’s idiosyncrasies with light-hearted moments.

Any fan of Marian Keyes, particularly the Walsh Sisters series will recognize the formula she employs here. Does that make it bad or predictable? Not in the least. There's plenty aside from Helen's personal troubles such as the mystery of Wayne's disappearance and the introduction to the rest of the bandmates and their bizarre behaviors to keep things interesting and send you into fits and giggles. So was The Mystery Of Mercy Close worth the wait? Yes, it most definitely was!