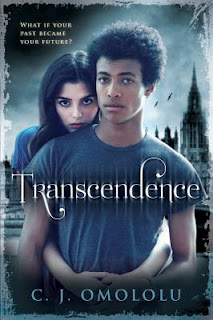 When a visit to the Tower of London triggers an overwhelmingly real vision of a beheading that occurred centuries before, Cole Ryan fears she is losing her mind. A mysterious boy, Griffon Hall, comes to her aid, but the intensity of their immediate connection seems to open the floodgate of memories even wider.

As their feelings grow, Griffon reveals their common bond as members of the Akhet—an elite group of people who can remember past lives and use their collected wisdom for the good of the world. But not all Akhet are altruistic, and a rogue is after Cole to avenge their shared past. Now in extreme danger, Cole must piece together clues from many lifetimes. What she finds could ruin her chance at a future with Griffon, but risking his love may be the only way to save them both.

Full of danger, romance, and intrigue, Transcendence breathes new life into a perpetually fascinating question: What would you do with another life to live?

Give me a book with some sort of historical element and I’m all over it. The Tower of London is awe-inspiring with its long history and many, many untold secrets. I was hoping for an alluring story with this splendid set up that also features one of my favorite cities, San Francisco.

Cole’s déjà vus  are becoming more familiar as they occur more regularly. It gets heightened when she meets Griffon and with his help she begins to understand them. Only a small part of the book takes place in London before Cole returns home to San Francisco. She's trying to live a normally as possible but still riveted by what she experienced in London and her strange encounter with Griffon. When they meet up again, there’s an undeniable attraction along with more questions than answers. She’s apprehensive but can’t keep away from him and what she might learn. After a string of near misses they’re convinced that Cole is in danger and that it’s from someone from her past life.

If you're looking for a different kind of paranormal, then Transcendence is a slow-burning but thrilling mystery to hold your interest. There’s Cole discovering who her present day enemy is and her trying to understand how her past lives are affecting her today. It made me question every new character introduced and what their agenda was, including when learned of the obscure group the Ahket. It was nice to read something different and I have to say there were elements of this book that made me think of the similarly themed movie Dead Again.

As much as I enjoyed Transcendence, I’m really looking forward to the next in the installment – Intuition coming in June. I’m hoping it will delve further into the Akhet and also further into Cole’s past. I’m making a guess here – certain things hinted at previously should play out on a larger scale. And those things may have some impact on Cole and Griffon.