The Redemption of Callie & Kayden (The Coincidence #2) by Jessica Sorensen 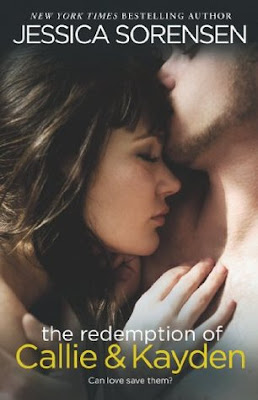 The dark secret Kayden has kept hidden for years is out. Worse, he's facing charges for battery. The only way he stands a chance against the charges is if Callie speaks up, something he'll never ask her to do.

Callie knows Kayden is going back to his dark place and desperately wants to save him. But saving him means admitting her secrets aloud. Callie and Kayden are stronger than they think, especially when they're together. Together they move forward, face their demons, and finally start to heal from their traumatic pasts.

It’s pretty much out there that I adore Jessica Sorensen. I fell in love with her Ella & Micha series and the previous Callie & Kayden book left me in such a state that I was almost mad at her for that. Almost. The Redemption of Callie & Kayden did not fail me.

The events in the last book left Kayden fighting for his life in the hospital and Callie a complete mess. Picking up the pieces aren’t as easy. In Coincidence the two of them danced around each other so beautifully even if Callie was slightly awkward with the attention from Kayden.

In Redemption, there’s so much pain and guilt, they don’t even know how to behave around each other. Kayden is worse off feeling hopeless and broken. All his insecurities are magnified so much that believes he’s no good for Callie and he doesn’t deserve her.  Callie is devastated to see Kayden spiral down and talk about getting a back bone! She stands up to him and reminds him that she still loves him no matter what.  She realizes that the only way to help Kayden heal and move past this means coming face-to-face with hers. She needs to be just as brave as she is demanding of him.

Everything that I love about Sorensen’s books is still here. It’s an uneasy ride for the two of them but once again with their friends Luke and Seth, they make progress. The chemistry between them is still there and I won’t lie, I enjoyed it. Aside from that, it’s how Sorensen addresses both their issues with sensitivity and honesty that makes this another winner.