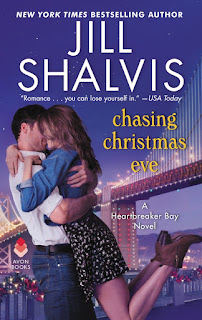 Run for the hills—temporarily. That's Colbie Albright's plan when she flees New York for San Francisco. Wrangling her crazy family by day and writing a bestselling YA fantasy series by night has taken its toll. In short, Colbie's so over it that she's under it. She's also under the waters of a historic San Francisco fountain within an hour of arrival. Fortunately, the guy who fishes Colbie out has her looking forward to Christmas among strangers. But she's pretty sure Spencer Baldwin won't be a stranger for long.

Spence's commitment to hiding from the Ghosts of Relationships Past means he doesn't have to worry about the powerful—okay, crazy hot chemistry—he's got with Colbie. Just because she can laugh at anything, especially herself... just because she's gorgeous and a great listener just because she gets Spence immediately doesn't mean he won't be able to let Colbie go. Does it?

and hope for a miracle.

Source:  Electronic advance copy in exchange for an honest review.

The holiday romance reading frenzy has begun!  I kicked off mine with Chasing Christmas Eve by Jill Shalvis.  A favorite of mine, Shalvis is known for her awkward and hilarious characters.  I read all her books, but the last few, to me, have been lacking some of her usual hilarity.  While I wouldn't really call Chasing Christmas Eve a holiday romance - it's really a romance that just happens to take place in the weeks leading up to Christmas.  The holiday itself doesn't play much of a role, more just a timing device.... the clock runs out on Christmas Eve, but hey, we will go with it anyway.

Jill Shalvis is back with her trademark funny in Chasing Christmas Eve!  Colbie is awkward as all hell and the Heartbreaker Bay gang is out in full force making Spence's life more interesting.  Colbie is overwhelmed by her success as a writer and her responsibilities and she runs away from home to find herself in San Francisco.  Specifically at the legendary fountain featured in this series.  Here she runs into Spencer and Elle.  Before she knows it, she's spending her vacation renting out an apartment in the building owned by Spence.  And of course, falling in love.  Colbie felt a little off, but she was Shalvis' trademark hot mess.  And her notes while she was waitressing at Finn's were killing me!

Spence has always been one of my favorite characters in this series, so I was happy to watch him fall.  :-)  Spencer is the enigmatic geeky millionaire.  He added humor and mystery to the series.  I liked that he wasn't angry about his past.  He was a little defeated about it, but not mopey and angry.  He was surprisingly open to falling for Colbie.

My only peeve about Chasing Christmas Eve is one that's pretty common in romance novels - it is heavy on the insta-love.  Within three weeks they are changing their lives (and I mean in a cross-country kind of move way) for one another.  Colbie is portrayed as an overly cautious kind of person, so this is pretty out of character for her.  But, like I said, this is a common pet peeve of mine when reading romance.

If you are a Shalvis fan, looking for a holiday themed book, or just a fan of fun, you should definitely check out Chasing Christmas Eve.  I'm always looking for holiday recs, so what's your favorite?