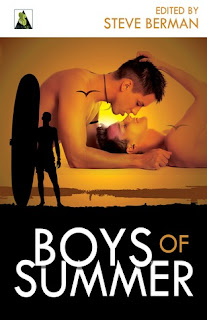 
Walt Whitman referred to a "Mad, naked, Summer Night!" In the pages of Boys of Summer, acclaimed editor Steve Berman's latest anthology, talented authors and fresh voices reveal the allure and excitement of the season for gay teens. June always promises romance. July entices with its raw heat, and August offers a languid fire that will burn out before autumn's approach. These are stories of young love and adventure, when the sky's ceiling is a bright blue marvel, when another boy's laughter at the beach can distract from dull summer jobs.


I am usually wishy-washy on short stories. Particularly romantic short stories. They tend to lack the character development necessary to make the romance believable.  But I am huge fan of m/m romance and was intrigued by a collection of short m/m romantic stories written for teens.


You need to know is that I ended up loving this book.  Truly loving it.  But it took me a few stories to get there.  I was very put off by the very first story – Portrait of the Artist as a Young Swamp Thing by Ann Zeddies.  Our two heroes (15 and 16 years old) know each other for less than a weekend.  This was a perfect example of why I don’t like romantic short stories.  But the bigger reason this particular story put me off was the fact that they didn’t really know each other.  They knew of each other but they didn’t know each other.    And at the end of the story, before the weekend was over, they were hitching it to Hero #2’s empty house to have sex.   I was buying the budding romance but I was not buying that it developed enough that they would jump immediately to sex.  I do get it.  All teens are interested in sex.  Teen boys are especially interested in having sex.  And most of the time they are being ruled by their hormones and aren’t thinking logically about it.  But just because they aren’t thinking about the importance of it doesn’t mean it’s NOT important and that it’s NOT a big deal.  It’s both of those things.  And I think as adults we have a responsibility to remind teens of this.  I am not going to tell teens to not have sex.  But I am going to tell them that it is a huge decision and they need to be sure that they are truly ready when they finally make that leap.  Because that’s a pretty big leap that requires a significant amount of trust that you are just handing over to another person.  I always think of the “sex talk” Kurt and his dad had on Glee (I seriously need to save that entire speech and save it for why my kids are older).  The talk where Kurt’s dad tells him that sex is important and that Kurt MATTERS.  Teens to know that they MATTER and because they matter they need to be sure they are ready to trust another person with something that is so very precious.

“You’ve got to know that it means something. It’s doing something to you, to your heart, to your self-esteem, even though it feels like you’re just having fun…. When you’re ready, I want you to be able to do everything, but when you’re ready, I want you to use it as a way to connect to another person. Don’t throw yourself around like you don’t matter. Because you matter, Kurt.”  - Burt Hummel in Glee

Wow, I just went on a tangent about teen sex.  Sorry about that.  That’s what I get for being overly opinionated, I guess. Please keep reading though.  There is a reason I gave this book a 4 Star review.  I promise.  And to put any possible parent fears to rest, this is not a graphic book by any means.  Like all YA romance, each character has their level of experience but that experience is never the highlight as it would be in an adult romance.


So now you know I didn’t like the first story and why.  But let me tell you about some of my favorites.


Breakwater in the Summer Dark by L. Lark is a romance between two boys that have attended summer camp together since they were eight. Their relationship in this story is strained because of an unexpected kiss that happened between them the summer before. The appearance of a mysterious creature in the lake brings them together and forces them to face their feelings for each other.  I loved this story.  This is one that I would love to be either novel or novella size in length.  I think it would be an even more amazing read.


Brass by Marguerite Croft and Christopher Reynaga is a romance after my own heart.  Two band geeks that are both out and they are friends and they both have a thing for each other.  But, of course, neither of them realizes it.  Finally our narrator decides to make his move and I am not going to lie.  It was probably one of the sweetest kisses I have ever read in the numerous YA books I have read this past year and a half.


Leap by ‘Nathan Burgoine was an absolutely lovely summer romance.  Ryan has been spending 3 weeks a summer in a cabin with his parents.  Two other cabins are inhabited by family friends.  Ryan, Angie and Barb (daughters of the family friends) get along great and love spending the summer together.  Then Will and his parents show up for their first summer at the lake and the three-some becomes a four-some.  This was a perfectly paced story with a perfectly paced romance.  I had a mile-wide smile reading this story that ended with a wonderful amount of hope.


Wheat, Barley, Lettuce, Fennel, Salt for Sorrow, Blood for Joy by Alex Jeffers was pure magic.  Who doesn’t love a story set on a boat in the ?  Add some magic, sexual tension and a loving family and you have a serious winner of a story.


Those were my favorites but they aren’t the only good stories in this book.  If you are a fan of romance and/or are interested in reading something that gives gay teens a voice, I highly recommend this collection.  It was truly wonderful. 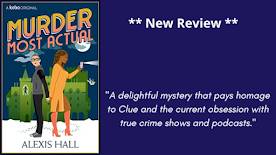 One Night on the Island 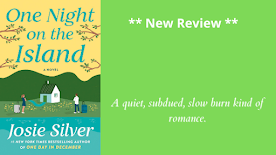 With Love from London 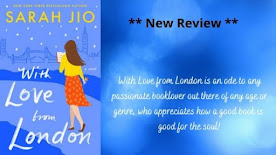 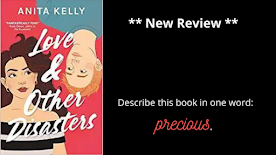 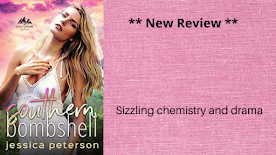 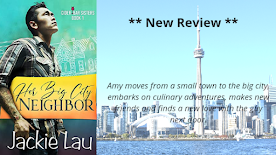 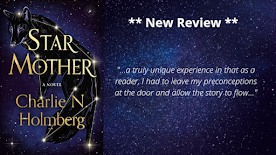