A Dangerous Inheritance by Alison weir 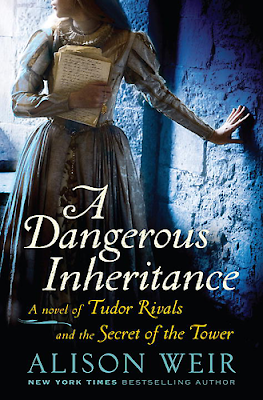 History is amazing. It’s the ultimate soap opera , reality show if you will, featuring impeccable heroes, devious scoundrels, dysfunctional families and egomaniacs  hungry for power. Weir’s novel encompasses all that delivering a well-crafted story set during two of the most tumultuous times in England and featuring one of the most gruesome murders in its history.


Weir parallels two young ladies who are witnesses to their respective monarchy’s uncertain futures.  Kate Plantagenet is the illegitimate daughter of Richard, Duke of Gloucester who ascends to the throne after imprisoning his two nephews in the Tower.  Katherine Grey, a cousin of Elizabeth I sits in the precarious position of being the potential rival to the throne should Elizabeth I not marry and have children.  Both are distantly related and both suffer tragically at the hands of their families and the political turmoil that they are unwittingly drawn into.


Rather than spell out how the story goes, I’ll explain how simply engrossing A Dangerous Inheritance is. Weir is an established historian and one of my favorite authors. (Yes, I did squeal like a little girl and do the happy dance when I received this ARC.) She has written extensively on the monarchy (I own many of her books) and her knowledge comes through very distinctly.  Two of her books in particular came in handy for me as I read this book, The War of the Roses and The Princes In The Tower.  Handy for me because I get geeky and like to research and look at genealogy charts.


What impressed me most was how Weir managed to make Richard III, one of the most reviled and ridiculed monarchs in English history, sympathetic through the eyes of his daughter Kate. She loves her father unconditionally and aims to disprove the malicious gossip at court surrounding her father’s unprecedented usurpation of the throne.  Many years later and Katherine Grey is embroiled in a Spanish conspiracy to depose Elizabeth I and plant her on the throne to restore Catholicism. Both girls, young and impressionable, are pawns in a volatile politically charged arena.


Whether you’re a fan of history or simply like some mystery with your historical fiction, A Dangerous Inheritance will pull you in. Weir is a remarkable writer. No matter fiction or non-fiction, she has always drawn me into the worlds she creates and I'm glad to feel as if I'm in the thick of it, not just a bystander reading words on a page. It’s not necessary at all to have previous knowledge of the political background in order to appreciate the course of events as they unfold in A Dangerous Inheritance. Weir does an excellent job of explaining the relationships and political ties without getting bogged down in too much weary detail.  However, if after reading this book, you feel so inclined to learn more about the of these families and the events mentioned, then I highly suggest her other two books I mentioned above.