The Maze Runner & The Scorch Trials By James Dashner 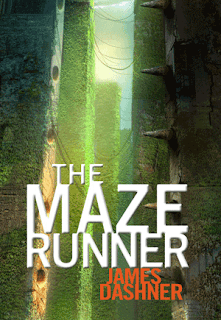 I am in awe of The Maze Runner series.  It is by far one of the best that I’ve read recently!  James Dashner is a genius who has created a complex world filled with plenty of suspense, strife and intrigue. I’m utterly spent after finally finishing the first two books.
I would describe this series as a cross between Lost, Lord of the Flies and the Hunger Games.  It’s intense from the very start and you’re left breathless upon making it to the end.
The Maze Runner begins with Thomas who finds himself alone inside a metal box. He has no memory, just faint glimpses of his past with no way of putting any of those memories in context.  He’s discovered by a group of boys.  It turns out that the box is actually an elevator of sorts that has transported him to a very different world called The Glades.
The Gladers, are all boys who’ve inhabited this world for 2 years by the time Thomas shows up.  Like Thomas, all of them have had their memories wiped.  None has managed to escape.  Despite the hopelessness, there's a very calm order that allows the boys to function.  The population is split into different groups each with a specific responsibility to ensure the running of their “society”.
There are plenty of questions but answers are few and far between.  The most important rule he learns is never to find himself beyond the movable walls that enclose The Glades at night.  If he does, he’ll find himself trapped in the Maze along with some unwanted company and no hope of survival.  There's an order to things he’s told several times and any deviation from it is discouraged.
Thomas’ arrival is like clockwork.  A “newbie” shows up every 30 days.  Supplies arrive every 2 weeks.  Since the story is told from Thomas’ perspective, you feel all his helplessness, confusion, frustration and anxiety swelling inside of him.  Whatever bits of fleeting memory Thomas has only lead to more questions and disappointment.
On his second day there, an unusual thing happens.  Another delivery is made and this time there’s a girl in the box.  She’s unconscious and carries a cryptic message that everything is going to change from that moment on.  This sends the Gladers into a panic and they become suspicious of Thomas and what his purpose in The Glades is.  Thomas has to defend himself while at the same time feeling an inexplicable connection to the comatose girl he doesn’t remember.  All he knows of her is her name, Teresa.
While the she's recovering, Thomas is determined to play an important role in The Glades.  Every day, a group called the Runners, travels beyond the walls to map out the Maze.  Every day they come home before the walls close, draw their maps, compare them for clues as to what the purpose of the Maze is and how to escape.  Thomas is drawn to the Maze and feels a sense of familiarity.  He befriends one of the best Runners, Minho and soon becomes one as well.
It’s so easy to get drawn into The Glades because Dashner has so deftly created this world with its own rules, habitat and even vernacular.  And Thomas as the hero is such a worthy character.  He’s not perfect.  He's not a stealth-like superhero.  He's just a kid who wants out in a bad way.  Every bit of vague memory he tries to snatch gets the reader excitable.  And he even discovers that he and Teresa have a special skill that sets them apart from the rest of The Gladers.  The friends he makes are such impressive personalities that it’s hard to fathom that they’re just kids – leaders Alby and Newt, Minho and a younger kid, Chuck, who quietly becomes one of Thomas’ best friends.
There are many twists and turns throughout the book that only add to the depth of the story.  Just like Thomas, I found myself going through plenty of scenarios in my head trying to figure out the purpose of the Maze and how all these people were connected.  This is why it reminded me so much of Lost.  And just like Lost, my mind was buzzing with plenty of conspiracy theories.  The ending had me in disbelief and I had no idea what was to come …
The Scorch Trials 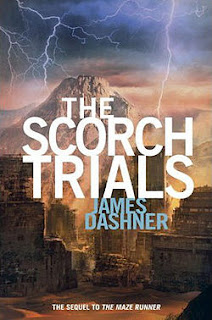 I can’t talk about The Scorch Trials without giving away what happens in The Maze Runner.  So I’ll say this  - it’s AWESOME!
Just when you think things couldn’t get worse, they do.  Thomas and his friends have been through hell and now they’re thrown further into it.  You learn more about the Maze and that Thomas and company serve a purpose.  The Maze was child’s play compared to what the next level is.
Thomas and his friends have received special instructions and must complete the next phase of their "trials" within a certain time frame in order to survive.  They've even been given special motivation -a reward they'll all receive at the end.  But there’s a hitch as well.  They can’t trust anyone or trust what they see.  Every thing is questionable.
The Scorch Trials has more going on in it than the previous book and don’t be surprised if you feel yourself getting a bit of an adrenaline rush.  New characters are introduced and Thomas constantly finds himself in many precarious positions.    Whatever small victory is accomplished is usually erased by some disappointment soon after. They all face physical challenges that drive them to their absolute limits.  They’re emotionally beaten down and scarred.  As the reader you do feel their frantic moments and their isolation.  And somehow they’re always clinging to hope no matter how overwhelming their circumstances are.  They don't ever give up.  They manage to push through no matter what.  Their collective determination is what drives this story.
By the end of the book I found myself thinking of the beginning credits of The X-Files - “the truth is out there”.  I have no idea what’s going to happen in The Death Cure that comes out in October but I know to expect more physical and emotional turmoil, lies, mind games, near-death moments and eventually ... the truth.
- Bel
(P.S.  Thank you James Dashner for making reality boring by comparison!)
Posted by bibliojunkies at 11:10 PM

Email ThisBlogThis!Share to TwitterShare to FacebookShare to Pinterest
Labels: James Dashner, The Death Cure, The Maze Runner, The Scorch Trials