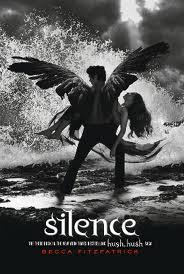 “Nora Grey can’t remember the past five months of her life.  After the initial shock of waking up in a cemetery and being told that she’s been missing for weeks – with no one knowing where she was or who she was with – she tries to get her life back on track.  Go to school, hang out with her best friend, Vee, and dodge her mom’s creepy new boyfriend.
But there is this voice in the back of her head, an idea that she can almost reach out and touch.  Visions of angel wings and unearthly creatures that have nothing to do with the life she knows.
And this unshakable feeling that a part of her is missing.
Then Nora crosses paths with a sexy stranger, whom she feels a mesmerizing connection to.  He seems to hold all the answers…and her heart.  Every minute she spends with him grows more and more intense until she realizes she could be falling in love.  Again.”
Dear Readers, October has been a good month for fun stuff.  My son’s birthday, new music releases by my favorite bands and last but never least, my fictional boyfriend Patch has returned!   You all know that I’m a complete nutter for him so imagine my frustration when I went to a certain retail location and they didn’t have him…err, I mean the book out.  How dare they keep me from my man, I mean book!  Luckily, BiblioJunkies Nat came to the rescue with her stealth-like determination and managed to get me a copy at a different retailer.  She still had to take matters into her own hands and pry open a box to retrieve him/the book.  She saved the day!
But I digress.  Let’s get back to business.  Silence didn’t start off the way I expected it to which was a nice surprise.  It takes place a few months later with Nora having no memories of the previous 5 months.  However, that doesn’t mean she experience déjà-vus and gut feelings nagging at her.  One déjà-vu  in particular from Hush, Hush will bring a smile to your faces.
Things have changed since she’s been away.  Her mother is now dating Hank Millar (gag!) her arch nemesis, Marcie’s dad.  People aren’t exactly being liberal with details to help her fill in the gaps including Vee, her loyal but slightly obnoxious best friend.  The same cast of characters return, Scott Parnell, the beefcake Nephil, Dabria, psycho fallen archangel and Det. Basso who we have yet to figure out.  I hope there’s more to him later.  And the Black Hand’s mark is everywhere.  Nora doesn’t give up.  She knows that there’s something missing and she’s determined to find out.  Even if it means making dumb decisions like walking around alone at night and getting into trouble.  Hello!  You’ve been kidnapped and away for months and whoever did this is still out there!  So some things don’t change.  (BilblioJunkies Nat and I will be having a discussion with Becca about this particular problem).  But Nora is becoming more fearless as the fog clears and she learns more about her family tree and what’s in store for her.
Things have also gotten a bit complicated thanks to the Black Hand. There’s something brewing between the Nephilim and the fallen angels and it’s up to our heroine and Patch to figure it out.  First she must remember him.  Watching her regain her memories of Patch is fun and he’s still as hot as ever (naturally).  As for Patch – I have to say I didn’t think he was as snarky in Silence probably because he’s busy brooding over Nora.  He’s going by Jev and is more serious with his own agenda.  The old Patch comes back later thankfully once he and Nora start reconnecting.  Case in point:
Nora: “ Do you think they’re going to buy that a guy in tacky leather chaps dances like this?”
Patch/Jev: “Keep it up, and I’ll put you in the chaps.”
Oh Patch, you say the sweetest things!  I won’t divulge much else except that while Silence was supposed to be the final book, Becca Fitzpatrick recently announced that there will indeed be a fourth book.  Yay!  Why a fourth?  Because she can.  And also because the book’s recurring theme of Cheshvan, the two-week period where fallen angels take over a human vassal’s body and run rampant like it’s spring break in Ibiza, is fast approaching and this time it looks like there’ll be a showdown between the Nephilim and the fallen angels.
I liked how Becca Fitzpatrick describes in intricate detail Nora's memories fleeting in and out and how she'd grasp at them, trying to piece them all back together.  You could feel the mental exhaustion she was going through.  I also liked the subtle hints that there's more to Nora we have yet to discover.  Silence was fun and judging by how it started and ended, I have no idea what’s going to happen in the next one.  Patch isn't the only one calling the shots anymore. Nora has had to make some tough decisions that affect them.  We’ll see how they fare...
~Bel
P.S.  There's also a  special edition (available only through Wlamart, Inc) which includes an exclusive chapter from Patch's point of view.  It's about the first time Patch and Nora meet and it's not what you think. ;-)
Posted by bibliojunkies at 7:30 AM