Alex Van Helsing: The Triumph of Death by Jason Henderson 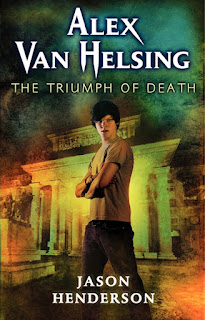 
Within months of discovering he's next in a long line of vampire hunters, Alex Van Helsing has already defeated two powerful vampire leaders. Not bad for a fourteen-year-old.
But when a newly risen vampire queen threatens the fate of the world, Alex faces his deadliest challenge yet. Teaming up with a motorcycle-riding witch, Alex jets between Switzerland, the UK, and Spain in a frantic race to prevent the queen from unleashing a curse that will plunge the world into darkness.
With the clock ticking, Alex barely has time to breathe, let alone see his friends, and he's beginning to wonder if being a vampire hunter is worth all its sacrifices. In this thrilling finale to the action-packed series described as "James Bond meets Dracula," everything—Alex's future and, ultimately, that of the world—hangs in the balance.

This third installment of AVH has Alex and a mysterious new friend, Astrid, trying to stop the “Triumph of Death” a spell which would create darkness and allow vampires to essentially take over the world.  While Alex discovers his magic half, races to save the world, and defies his superiors in the Polidorium, he struggles with how to be a friend and yet protect his friends at the same time.  And is it even possible to have friends or a personal life when you are fighting to save the world?

If I had to come up with one complaint about The Triumph of Death, it would be that we did not get enough time with Paul, Minhi and Sid.  They are such great characters and were such a huge part of the first two books, I missed them while reading Triumph.

As with the rest of the series, The Triumph of Death was fast-paced action-adventure and completely irresistible.  Alex is such a lovable character and the world created by Henderson is so much fun.  Probably the most mature 14 year old I can think of Alex's adventures are great for all ages.  I've recommended this series to people from age 6 to adults in their 50s and 60s.  Whenever I recommend the AVH series to someone, I tell them to think of modern day Hardy Boys with high tech gadgets and vampires.

I know the book description says that this is the final installment in the series, but I really hope that isn’t so.  I would hate to say goodbye to Alex and friends!   I have been thinking all day that I cannot be the only person who thinks AVH would make a great movie or tv series...
Posted by bibliojunkies at 12:00 AM