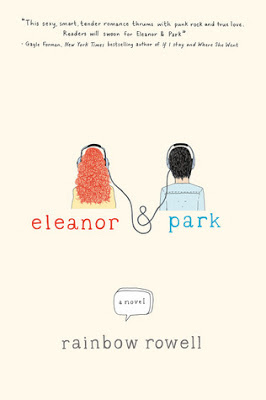 "What about Romeo and Juliet?"

Set over the course of one school year in 1986, ELEANOR AND PARK is the story of two star-crossed misfits – smart enough to know that first love almost never lasts, but brave and desperate enough to try. When Eleanor meets Park, you’ll remember your own first love – and just how hard it pulled you under.


Eleanor & Park is one of the standouts of the year and will definitely be a strong contender for my Top 10 of 2013. Between Rowell’s smooth writing, Eleanor and Park’s charismatic personalities and the amazing soundtrack as backdrop, I was completely under its spell.

Set in Omaha in 1986, Eleanor and Park first meet each other on the school bus. Park likes to keep to himself on the bus and occupies himself with his music and comics. New girl Eleanor shows up and threatens his peaceful, under-the-radar sanctum by sitting beside him.  Eleanor has no choice since most of the seats have been taken and Park looks the least threatening. What begins as a silent hostility evolves into steadfast friendship.

What did I love about the book? Pretty much everything. Above all, it was Eleanor and Park themselves.  I easily identified with Eleanor’s awkwardness and insecurities which are atypical of that age. There were so many times when I thought to myself, "yeah been there, felt that". She has a messed up home life with a stepdad who drinks constantly and abuses her mom. She’s the eldest child in a family that barely has any money and her house is a disaster as evidenced by the lack of a door on the only bathroom in the house. Eleanor is always trying to be invisible to her stepdad whom she despises because she doesn’t want to stir up any more trouble than there already is.

Park’s life is magical in comparison. His parents are still madly in love and their PDA tends to make Park a little uncomfortable. At that age who wants to see their parents make out? He’s essentially a good kid who is aware that he doesn’t necessarily live up to his father’s high expectations. His dad is more of a macho guy who was stationed in Korea where he met Park’s mom.  Park knows how different he is from is dad and even his younger brother. Where they’re taller, more athletically-inclined and even look more like each other, Park is shorter, not really interested in sports and looks more Asian.  Despite this, Park has carved out his own identity and carries himself with surprising self-assurance. He is the kind of boy any girl would be luck to have as a first love. He has that "forever boy" vibe going on that will seriously melt your heart. Oh and he wears guyliner. Yeah. I love him.

When Eleanor and Park meet, they’re an enigma to each other. Each is judging the other one based on first impression, day-to-day appearance and random encounters. As the school year progresses and Park catches Eleanor reading his comics over his shoulder, he decides to adopt a less hostile attitude towards his seat-mate and starts loaning her his comics. The best part of all of this is that they haven’t even spoken a word to each other yet – except when he yelled at her to sit down on her first day on the bus. I love how Rowell describes them starting to notice each other. It really feels like your inside their minds as they're daydreaming about each other. One of my favorite scenes is when they have their first real conversation and it's not even in person but over the phone. It's so innocent and sweet. As they get more comfortable with each other, Park introduces her to a new world where hanging out at his home is like Disneyland. But that bubble could burst because of Eleanor's insecurities about her appearance and her fear of her step dad constantly get in the way.

I cannot say enough how truly awesome Eleanor & Park is. The description of their budding friendship and romance has so much heart. And it's their friendship that saves Eleanor from drowning in her depressing family life. Oh and let's not forget the soundtrack that had me giddy with nostalgia! From The Smiths to Joy Division to Elvis Costello, I was a happy, happy reader! It truly is a feel-good story that has clung to me. I find myself wondering what kind of people they'd be now, what they would have overcome and just for my amusement, what kind of music Park would have discovered along the way. And hopefully, he'd still whip out the guyliner on occasion. :)