Summer On The Short Bus by Bethany Crandell 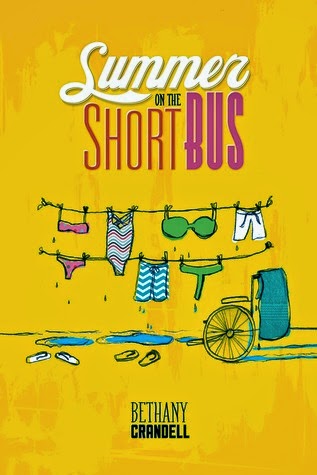 Spoiled, Versace-clad Cricket Montgomery has seventeen years of pampering under her belt. So when her father decides to ship her off to a summer camp for disabled teens to help her learn some accountability, Cricket resigns herself to three weeks of handicapped hell.

Her sentence takes a bearable turn as she discovers the humor and likeability of the campers and grows close to fellow counselors. Now, if she can just convince a certain Zac Efron look-alike with amazing blue eyes that she finally realizes there's life after Gucci, this summer could turn out to be the best she's ever had.

Summer on the Short Bus is a very non-P.C., contemporary YA with a lot of attitude, tons of laughs, and a little life lesson along the way.


After she's busted at a party, Cricket’s dad feels that he’s at his wits end with her shenanigans. She doesn’t take him seriously when he threatens to dole out his next punishment. After all, he’s been a pushover all these years so what makes this time different? Well, he means business. She gets shipped off to "Camp I Can" where she is to be a counselor to special needs children. Cricket has absolutely no experience taking care of herself much less anyone else. having grown up self-centered. She's in complete shock to find herself in the middle of nowhere (Michigan without cell phone reception feels like nowhere) and all she can think of is escaping. The only thing that keeps her from having an ugly meltdown is the hottie counselor, Zac Efron doppelganger, Quinn. She resigns herself to situation when her one and only escape plan fails. It doesn’t mean that she embraces camp life. In fact, it’s the opposite – she’s horrified that she has to be there all summer and work with these kids who make her feel so uncomfortable.

It would be incredibly easy to misconstrue Summer On The Short Bus as a vulgar and insensitive view of people with special needs. But as I laughed out loud several times at the sarcastic humor, I realized that it’s really more about the people who interact with them. Cricket doesn’t experience any immediate “aha” moments as she learns to get used to her new environment. Her no filter of a mouth lands her in all sorts of ridiculous scenarios.  Her peers share stories with her that demonstrate that she’s not the only one who has ever felt out of their depth at the camp. The best laughs come from her interactions with the camp kids, specifically the two she's in charge of, Claire and Meredith, who don’t see themselves as anything different. They’re so funny saying whatever comes to mind, instantly glomming on to Cricket like she’s their best friend. She doesn’t know what to make of her little fan club but soon finds herself enjoying their strange company and idiosyncrasies. As it turns out, may be she's the one who's been taken under their wings.

Cricket makes a mess of things due to a giant faux pas. When she realizes that she has hurt someone she truly cares about, she's stunned and helpless. Even she can't defend her own actions. Asking for forgiveness is unfamiliar territory and this new perspective gives her much to think about.

Crandell says in her notes that she didn’t intend to send some message with this book. Instead she was searching within herself for a way to connect with her own special needs child while simultaneously staying true to her personality. I had seen Crandell at a book signing last year and her sarcastic, dry humor is what drew me to buying her book. I thought a lot of the dialog felt very authentic. And as I finished it, I concluded that it's not so much about changing people's minds but about how you can grow to be a more empathetic person and still be true to who you are.