The One That Got Away by Bethany Chase 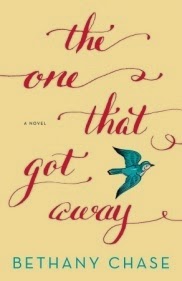 Perfect for fans of Emily Giffin and Jennifer Weiner, this bright, funny debut from a fresh voice in fiction offers a delicious take on love, family, and what it means to build a home of one’s own.

Sarina Mahler thinks she has her life all nailed down: a growing architecture practice in Austin, Texas, and an any-day-now proposal from her loving boyfriend, Noah. She’s well on her way to having the family she’s hoped for since her mother’s death ten years ago. But with Noah on a temporary assignment abroad and retired Olympic swimmer — and former flame — Eamon Roy back in town asking her to renovate his new fixer-upper, Sarina’s life takes an unexpected turn.

Eamon proves to be Sarina’s dream client, someone who instinctively trusts every one of her choices — and Sarina is reminded of all the reasons she was first drawn to him back in the day. Suddenly her carefully planned future with Noah seems a little less than perfect. And when tragedy strikes, Sarina is left reeling. With her world completely upended, she is forced to question what she truly wants in life — and in love.

Full of both humor and heartbreak, The One That Got Away is the story of one woman’s discovery that, sometimes, life is what happens when you leave the blueprints behind.


Sarina is a well-respected and successful architect in her early thirties whose career is gaining traction. She’s her own boss, managing her own projects and genuinely in love with what she does for a living. She has a wonderful roommate Danny, a fun best friend Nicole and a devoted boyfriend, Noah. Noah’s a corporate lawyer and currently in Argentina working on a huge merger. This means that they’re apart for months at a time, resorting to phone calls and skyping to keep in touch. Sarina feels happy with her world, that is until Eamon comes back into her life.

Eamon is the one (night stand) that got away. She thought they’d hit it off perfectly but when the next morning came he had an abrupt change in attitude and left after promising to call her. That left Sarina wondering all sorts of things. Could she have done something wrong? Why didn't she ever hear from him? She was understandably hurt by the quick departure and kept their involvement a secret from Danny, his best friend. She eventually met Noah with whom she has found that stability she values. Eamon’s reappearance illicits mixed emotions. She acknowledges that though she’s happy to see him, there’s still some level of hurt there, naturally making things a wee bit awkward. Worse, he’s still as gorgeous and as sweet as ever. Not that she’s willing to admit that aloud. When he announces that he’s ready to move back to Austin to lay down roots, he hires Sarina to help him find a place to rehab. Great, so now he’s a client!

Here’s what I loved about this book: while it’s a romance, it’s not focused solely on Sarina's love life. She is written as a well-rounded character with so many facets to her. She is a career woman who enjoys her job and has ambitions for expanding. I really liked how absorbed she’d get in her projects and how she described her euphoria over light-bulb moments or ideas that inspired her creations. She’s a go-getter who’s smart, calm and confident in her skills. The other side of her is her close relationship with her step-dad whom she adores. He’s the last connection to her beloved mother and the way she looks up to him is just so incredibly sweet.

Trouble does arise when she starts developing feelings for Eamon just as her relationship with Noah starts to get shakey. The distance hasn’t helped and as they discuss their long-term future, she realizes that they may not want the same thing. Now as she enters the next stage in her life, she has to give serious thought as to how her ambitions fit into a marriage and possibly children. Or is it the other way around – how do marriage and children fit in with her ambitious plans to become a well-known architect? The fact that she and Noah have differing opinions on the matter is troublesome. Then there’s Eamon on the periphery who's praising her talents while encouraging her to pursue her dreams. He finally comes clean about his feelings for her and why he left all those years ago. Now Sarina is not a whimsical little thing and won't drop everything simply because he announces that he's ready. And this is what I love best about her: as confusing and frustrating as life has become, she's still level-headed enough to examine her motives and not throw away years she has invested in a relationship with Noah without some serious contemplation.

The One That Got Away is simply adorable and I fell for it hard. For me personally it was refreshing to read a female protagonist with that level of maturity and self-assurance. And I can't forget the other co-star in this story - the city of Austin. All I know about it is that it's home to Austin City Limits, South By Southwest and incredibly hot in the summer. Bethany Chase's description of some of the local areas and markets has me wanting to visit sooner rather than later. If you're in the mood for a well-written, well-balanced romance, don't pass up The One That Got Away!

Connect with Bethany on Twitter and Instagram. Being an interior designer herself, she often posts gorgeous pictures that capture her attention!