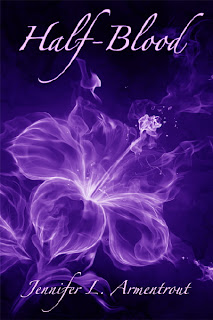 The Hematoi descend from the unions of gods and mortals, and the children of two Hematoi—pure-bloods—have godlike powers. Children of Hematoi and mortals—well, not so much. Half-bloods only have two options: become trained Sentinels who hunt and kill daimons or become servants in the homes of the pures. Seventeen-year-old Alexandria would rather risk her life fighting than waste it scrubbing toilets, but she may end up slumming it anyway. There are several rules that students at the Covenant must follow. Alex has problems with them all, but especially rule #1:
Relationships between pures and halfs are forbidden.


Unfortunately, she’s crushing hard on the totally hot pure-blood Aiden. But falling for Aiden isn’t her biggest problem--staying alive long enough to graduate the Covenant and become a Sentinel is. If she fails in her duty, she faces a future worse than death or slavery: being turned into a daimon, and being hunted by Aiden. And that would kind of suck.


Half-Blood is a tremendous new spin on Greek Mythology, the gods and their descendants.
The Good:
Half-Blood is engaging and entertaining, full of heartbreak and the struggle to find your place in the world.  Alex's plight drew me in and demanded my complete attention.  The characters are fun and look for the great smack talk between Alex and her archnemisis!
The Bad:
Part of the story is that Half-Bloods that do not play by the Pures' rules or are not proficient fighters are made slaves.  This is bad enough, but the way they are made slaves is that they are given a drug that strips them of all free will and then they are given scars or marks on their foreheads to display their status to the world.  I found this deeply disturbing and it was almost enough to turn me off the book.  Not quite, but it really hit me hard - it is one thing to be made a slave, but to take away someone's mind and will - yeah, I did not like that...
Keep an eye out for the second Covenant book, Pure, releasing April 2, 2012!
~Shel
Posted by bibliojunkies at 12:01 AM