We All Looked Up by Tommy Wallach 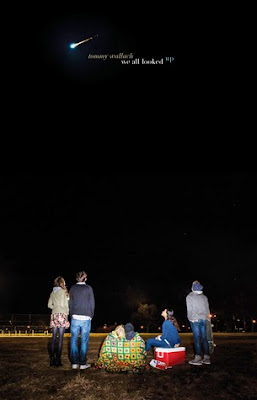 Before the asteroid we let ourselves be defined by labels:

The athlete, the outcast, the slacker, the overachiever.

But then we all looked up and everything changed.

They said it would be here in two months. That gave us two months to leave our labels behind. Two months to become something bigger than what we'd been, something that would last even after the end.

In his remarkable debut, Tommy Wallach has delivered an impactful and thoughtful story on how we as humans can simultaneously be significant and not, and when it all comes down to it, it’s over in a blink of an eye. Despite the gloom that hangs over it, this book has plenty of lighthearted and eye-opening moments.

It opens with Peter, a gifted and popular athlete who has begun to question his status. During one of his classes, his teacher poses a question that jars him. It essentially makes him question his own existence and what his experiences have taught him or brought him so far. Sure he has the hot, popular girlfriend, he’s well liked, he’s on his way to a good school, but what does it all really mean? Whatever his teacher brought up in class has stirred something within Peter that launches him on a soul-searching expedition.

Eliza is the girl who was happiest when she was under the radar. Then Peter happened to her the year before and her reputation took a major hit. A friend suggested that she should just use that reputation to her advantage and so she went with it, going from barely seen to being known all over but for all the wrong reasons. She has her own problems – a terminally ill father and a mother who left the family. Her salvation has been photography where capturing images in black and white is a language that she can understand. I have to say, I enjoyed the description of how she related to the pictures and what they meant to her.

Anita has been slowly suffocating under the pressures foisted upon her by her parents. She’s been groomed all her life to have excellent grades so she can enter the top notch schools. There’s no room for anything else including what she loves most – singing and performing. The strict regimen is finally getting to her and she’s slowly drumming up the courage to break from their crushing expectations.

Andy is the kid everyone writes off, including his parents, as he has no interest in school or succeeding. He’d much rather get high and skate all day – the quintessential slacker.  He’s the biggest surprise of all because he’s quite intuitive and somehow comes up with the right thing to say to someone when they need it. Where the others are mostly very serious, Andy brings a certain amount of humor to the story.

Each of these four people fulfills a certain kind of stereotype. By the end of the book, those stereotypes are broken and we see more to them than what we initially saw. All of them notice the asteroid and can sense its importance. Then it’s announced that the asteroid is headed for earth and that only a small percentage of the earth’s population will survive its impact. For those who survive, what’s there to live for? And what does that mean for now? The pending calamity causes each of them to be introspective. This could be their chance to rectify a wrong, reinvent themselves or fight for something they’ve long wanted.

Everyone's emotions run the gamut as chaos and civil unrest follow leading some very irrational events. These four individuals thrown together by circumstances, but who otherwise may not have uttered a word to each other before, must now rely on each other.

We All Looked Up also has an amazing cast of supporting characters too, such as Peter’s rebellious younger sister, Misery, Andy’s volatile friend, Bobo (a bad nightmare waiting to unleash itself), and Eliza’s dad. All of them add so much to the story. But the two supporting people I loved the most were the teacher Mr. MacArthur and the student counselor Suzie O. They have this amazing ability to connect with their students without condescension or hostile admonishment. They just know how to speak to these kids. I would have loved to have had Mr. MacArthur as my teacher!

I’d been seeing We All Looked Up everywhere and had heard so much buzz about it. For me, there was something about the title that spoke of endless possibilities and surprises. And despite the impending end of the world, these friends discovered those possibilities and made the most of their last few weeks. This book gets a solid 5 stars from me and I cannot recommend it enough!

Email ThisBlogThis!Share to TwitterShare to FacebookShare to Pinterest
Labels: achiever, asteroid, athlete, end of the world, forgiveness, labels, outcast, Simon and Schuster BFYR, slacker, Tommy Wallach, We All Looked Up, We All Looked Up soundtrack